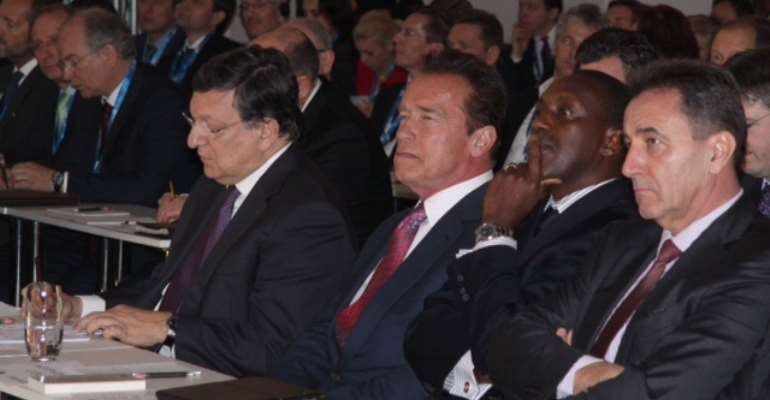 Organized by the R20 Regions of Climate Action, the group “seeks to promote and implement projects that are designed to produce local economic and environmental benefits in the form of reduced energy consumption and greenhouse gas emissions, strong local economies, improved public health and new green jobs.”

A coalition of partners led by regional governments and founded in 2010 by Governor Arnold Schwarzenegger and other global leaders in cooperation with the United Nations, the non-profit organization believes that “climate change and green economic development can be tackled at the subnational level, "said Mr. Schwarzenegger, the founding R20 chairman.

"If we want to inspire the world, it is time for us to forget about the old way of talking about climate change, where we crush people, where we overwhelm people with data," the former governor said. "There is a new way, a more sexy, a more hip way. Instead of using doom and gloom and telling people what they can't do, we should make them part of our movement and tell them what they can do. I mean I still drive my Hummers but now they are all on hydrogen and biofuel ... We need to send a message that we can live the same life, just with cleaner technology." he stressed in his remarks.

As the second keynote speaker, Yumkella declared strong support for the R20 group and congratulated Governor Schwarzenegger for taking the bold step to launch the group in his "home country" of Austria. "Two years ago the Governor inspired me to go on with the Sustainable Energy for All Initiative (SE4ALL), and advised that I pay no attention not to the Nay Sayers....so now we will partner with R20 to make energy poverty history." Last September, UN Secretary General Ban appointed Yumkella as his Special Representative and CEO of the new UN initiative.

For his part, President Barroso emphasized that sustainability is deeply engrained in both the EU growth strategy (Europe2020), the proposed multiannual budget (MFF) and across all EU policies. "R20 is a shining example of this new mind-set in business and in government, because it draws on so many stakeholders and their expertise," as he noted the importance of collaborating with all relevant actors, particularly those in business and governments and on all levels – regional, national and global – to ensure sustainable future for our planet.

On the sidelines of the first international sustainable energy conference, Kandeh Yumkella of UNIDO expressed profound gratitude to Carlos Ghosn, CEO of Renault-Nissan, for his support and commitment to the UN Secretary General Ban's Sustainable Energy for All Initiative (SE4All).

Going forward, Dr. Yumkella noted that the initiative is looking forward to partnering with a few other CEOs (including Renault-Nissan's CEO) that really believe that together we can have a zero-emission car future. “We will work with these CEOs to see how we can support them to convince governments and municipalities, to create the right incentives so that consumers will also purchase these kind of vehicles,” said the UNIDO Boss.

The two day event brought together over 1000 participants including policy makers and delegates/representatives of governments including Austrian Federal Chancellor, Werner Faymann, who opened the conference and welcomed all delegates on behalf of the Austrian people.