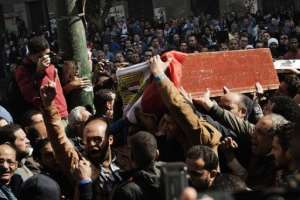 CAIRO (AFP) - An Egyptian activist who slipped into a coma following days in police custody died on Monday, the health ministry and his party said, setting off a storm over police brutality in the new Egypt.

According to the health ministry he was brought to Cairo's Al-Helal hospital by ambulance on January 28 -- three days after he went missing -- unconscious and suffering from internal bleeding.

Activists detained with Guindi and later released said he had been taken to a police camp and subjected to torture, his mother Samia told the private Al-Nahar satellite channel.

The Popular Current, to which Guindi belonged, said in a statement the activist died "as a result of torture."

Photos of Guindi, his face bruised and battered, lying on a hospital bed have been circulating on social media networks.

Tributes have poured in for Guindi on Twitter and Facebook, with activists dubbing him the "new" Khaled Said, an Egyptian man who was beaten to death by police in 2010 and who became a symbol of the fight against police brutality.

Hundreds of people turned out for Guindi's funeral prayer, which was held in in Tahrir Square.