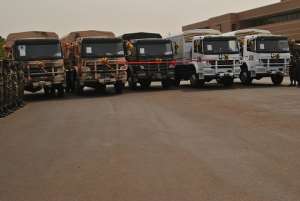 Accra, Feb 01, GNA -The US Embassy Ghana has presented five trucks valued at 650,000 dollars to the Ghana Armed Forces in Accra.

Mr. Gene Allan Cretz, the U.S Ambassador in Ghana who did the presentation, said apart from the vehicles, the Foreign Military Financing (FMF) would be providing funds for the purchase of spare parts, manuals and training.

He said three more trucks would be provided to bring the total value of the current FMF package for Ghana to a little over 1.26 million dollars and added that the acquisition of the trucks were made possible through the U.S government's FMF program.

'In addition the funding has been used to provide training and courses for personnel in all branches of the Ghana Armed Forces,' he said and added that the Embassy was pleased the trucks would be used regionally with some heading soon to Liberia and Mali.

Lieutenant General Joseph Henry Smith (Rtd), the caretaker Minister of Defence who received the trucks, said two had already been earmarked for deployment with the Ghanaian contingent in Liberia and the other three would be deployed to Mali.

He said the presentation was not the first time the U.S. government was offering assistance to the Ghana Armed Forces with the aim of enhancing their efficiency and professional capacity.

The service continues to enjoy varied support raging from training packages to logistics and material supports,' he said.

He said the supports had improved the level of professional, technical and tactical proficiency of the Ghana Armed Forces personnel and thanked the U.S Embassy for the donation.