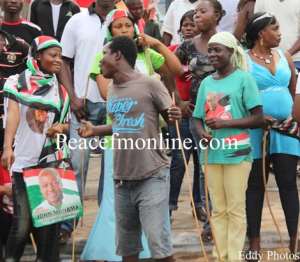 The following negativities usually occur any time the National Democratic Congress (NDC) and its antecedent PNDC come onto the political scene.

1. The issue of homosexuality becomes a national topic because either the Vice President or Minister of Gender, Children and Social Protection are perceived to be gay and lesbian respectively.

3. Politics of insults, and character assassination become the order of the day because the more you insult, the higher the promotion. Even party founders and their wives become victims. The Clergy, teachers, cocoa growers, nurses, and Christians suffer from these babies with sharp and poisonous teeth.

4. Politics of lies and propaganda is strengthened as even black sheep could easily be turned into white cow. A well-known gay in the person of Andrew Solomon could donate $20,000 to the president, but he could deny being a friend to him. Over 1.6m phantom jobs could be created in a spate of two years.

5. Armed robbers seize control of the state as Ministers of State either shoot themselves or get attacked by these robbers. Remember Dr. Benjamin Kumbuor's episode.

6. Massive Unemployment hits the country leading to the formation of Unemployed Graduates Association.

7. The standards of education at all levels seriously go down as the NDC draws its strength mostly from illiterates that accept the party's propaganda and lies.

8. The National (Public) Debt quadruples without a corresponding increase in socio-economic development. For instance, from GHC9.6bn as of 2009 to GHC23.5bn in 2011.

9. Many Ghanaians fall below the poverty line and this affects their standard of living.

11. The level of corruption and thievery gets to a gargantuan level as the president, his brother, and ministers of state loot the state coffers.

12. Kyinkyinka, pampers, hampers become scarce commodities in the market because Ministers of State and Presidential Aides purchase them in bulk.

13. Load Shedding and Water Rationing are usually the party's solutions to energy crisis and water problems.

15. There is general apathy among Ghanaians, especially Diasporans as people lose confidence in the calibre of people in the helm of affairs.

16. Machomen have the power to abuse innocent Ghanaians with impunity. They boast of their party being in government.

17. Team B Ministers are appointed or "greedy bastards" surround the president leading to mediocrity and economic mismanagement.

22. Foreign loan acquisition replaces taxation as the major source of government revenue; but such loans usually go into private pockets.

24. Either a sitting president beats his Vice mercilessly and drives him away from Cabinet meeting, or Vice President "kills" the president to pave way for his political ambition to be materialised.

25. Factions emerge from the NDC leading to many breakaway parties - NRP, DFP, and NDP.

26. No major policy or programme is formulated or undertaken to move the country forward. All we hear is blame game politics.

28. State Security apparatus shows complete bias to the government and applies only selective justice. In effect, Ghana turns into a Police State.

29. Serial killings of women crop up; other women are stripped naked and caned in public.

30. Ghana turns into a Heavily Indebted and Poor Country due to reckless borrowing. Currently, each Ghanaian owes over GHC1000.

31. There is usually persecution and prosecution of political opponents for no apparent cause.

35. Either High Court Judges are murdered in cold blood or many ways are found to kill cats (Supreme Court Judges) by party chairmen.

38. Constructive criticisms by the opposition are seen as insults and Ministers, Deputy Ministers, and even Caretaker Presidents respond to such criticisms with insults.