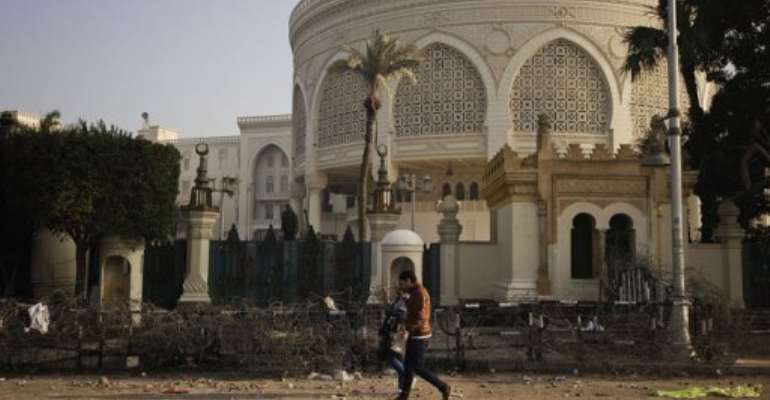 An Egyptian couple walks past a damaged barbed wire fence outside the presidential palace in Cairo on February 2, 2013. By Gianluigi Guercia (AFP)

The opposition National Salvation Front demanded Morsi be prosecuted for "killings and torture" as it urged Egyptians to stage peaceful protests.

"The Salvation Front completely sides with the people and its active forces' calls to topple the authoritarian regime and the Muslim Brotherhood's control," it said in a statement.

It said Morsi should be put on trial after an "impartial investigation" and ruled out dialogue with the presidency until "the bloodletting stops and those responsible for it are held accountable."

But, in a possible sign of differences in a troubled coalition that comprises liberals and leftists, NSF members disagreed on the statement's intent.

"We are calling for the downfall of the regime of tyranny, not the regime," said Khaled Dawoud, the NSF's spokesman, explaining it meant "the abuse of citizens and torture and ignoring the demands of the opposition."

But another NSF member, Hussein Abdel Ghani, said: "I think this statement can be read to mean only one thing, which is to topple Morsi's government."

Clashes on Friday night between protesters and police outside the presidential palace left one dead, and police were filmed beating and dragging off another man, in the wake of clashes last week that killed nearly 60 people.

The beating was "an inhumane spectacle ... no less ugly than the killings of martyrs, which is considered a continuation of the security force's programme of excessive force," the NSF said.

A 23-year-old was shot dead and 91 people were injured in Friday's clashes, a medic said, while the interior ministry reported 15 of its men wounded by birdshot.

Police said they made 20 arrests, and they were filmed on television beating and dragging a naked man to an armoured vehicle, outraging Morsi's critics who compared the incident to practices under deposed president Hosni Mubarak.

Interior Minister Mohammed Ibrahim has ordered a probe to "hold accountable" the policemen who beat the man, his office said. He would resign if "that's what the people want."

The presidency said it was "pained by the shocking footage of some policemen treating a protester in a manner that does not accord with human dignity and human rights."

It would follow the interior ministry's investigation of what it called an "isolated act."

There was no sign of any protests on Saturday, as debris-littered streets around the presidential palace reopened to traffic.

The presidency has said security forces would deal with violent protests with "utmost decisiveness" and that it would hold opposition groups found to have incited deadly clashes as "politically accountable."

Morsi's Facebook page said the protesters had initiated Friday's violence by trying to break into the palace.

The opposition, which accuses Morsi of betraying the revolution that toppled Mubarak two years ago, has distanced itself from the violence and urged demonstrators to exercise "utmost restraint."

The NSF had joined rival Islamists on Thursday in condemning violence and supporting efforts for a national dialogue, but insisted on a unity government and amendment of an Islamist-drafted constitution that has polarised the nation.

People took to the streets in several cities on Friday in a show of opposition to Morsi and his Muslim Brotherhood after last week's deadly unrest across Egypt, the worst since Morsi was elected in June.

Port Said accounted for most of the almost 60 people killed. Violence erupted there after 21 local supporters of a football club were sentenced to death on January 26 over the killings of 74 people in post-match violence.

The crisis has sapped Morsi's popularity and complicated negotiations for a crucial $4.8-billion IMF loan that could help bail out the teetering economy.