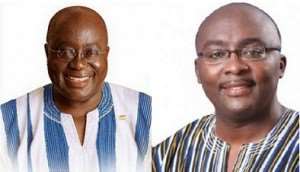 On Thursday December 6, 2012 after a series of so-called strategic meetings and feel-good high-ups, the former flagbearer of the NPP, Nana Addo Dankwa Akufo-Addo, retired to bed and dozed off thinking that he would wake up the next day Friday December 7, 2012 and smell the fragrance of “His Excellency” on his doorstep.

Nana Akufo-Addo slept very well and woke up around 9 am on Friday December 7, 2012 and after having a continental breakfast with his family and friends, he went out to cast his vote. Due to his political stature and age, Akufo-Addo did not join the queue but was allowed to cast his vote and promptly left the polling station.

Probably unknown to Akufo-Addo there were millions of Ghanaians who did not have the luxury that he had. Those people did not sleep through on December 6; neither did they jump the queue because of their political stature and age, but those millions of people had to stay in the queue some as early as 10 pm on December 6, 2012 till the polls opened the next day for them to exercise their votes.

It is important to note that out of the 10,995,262 votes declared as valid votes cast on December 9, 2012 there were 4,670,504 votes that were cast at 11,916 polling stations across the country. I am guessing that many of these votes came from ordinary individuals who wanted their votes to be counted and their voices heard.

But Akufo-Addo who is seeking to be president at all cost is requesting the Supreme Court to throw out the votes of 4,670,504 people that were cast at the 11,916 polling stations across the country, because according to him they do not matter and that they are standing in his way to victory in the 2012 Presidential Election.

In what can be described as the greatest political gimmick of all time or the biggest shifting of political goal post by the NPP, Akufo-Addo has now taken his joke to the highest crescendo by asking the Supreme Court Justices who are hearing their petition on the so-called electoral fraud to disenfranchise 4,670,504 Ghanaians, and in the process declare Akufo-Addo the winner of the 2012 elections.

Yet, it is these same NPP supporters who gathered over the weekend at the Dome Kwabenya Park in Accra and launched the so-called, “Let My Vote Count” campaign. Is it not strange that whilst these NPP folks are crying for their votes to be counted, Akufo-Addo is calling for the votes of 4,670,504 NDC supporters to be thrown away? Can the NPP have it both ways?

The NPP seems to be taking Ghanaians and to a large extent their own members on a roller coaster ride. And it is sad that anytime the NPP changes the goal post or come out with another assumed so-called numbers on the 2012 elections, their youth leaders jump and hail it as a good work done. The young leaders of the NPP, who have been kept out of the Supreme Court premises by the NPP leadership to prevent them from knowing exactly what is going on there, clearly do not know how the NPP has become a laughing stock at the Supreme Court. Now let me give you a few examples.

Some few hours before the Chairman of the Electoral Commission (EC), Mr. Kwadwo Afari Djan, declared the results of the Presidential Election on Sunday December 9, 2012, the leadership of the NPP sought to stagger the announcement by suddenly holding a press conference with the false claims that they have evidence of electoral malpractice and presented a petition to the EC. This led to a lengthy meeting between the EC officials and members of the National Peace Council of Ghana which certainly delayed the announcement of the presidential results for hours.

At the meeting, the NPP folks asked the EC to delay the announcement of the results for 24 hours to enable them to present the strong evidence they have. A consensus was reached that the results would be declared whilst the NPP can go to court if they strongly believe that they have a case on hand.

But just some few hours before the presidential results were announced by the EC; the NPP held a press conference and declared that 36,000 votes have been wrongly given to President Mahama and that they were going to provide proof to back their claims.

On Monday December 10, 2012, a deputy Communications Director of the NPP, John Boadu asserted that the NPP have evidence to show that in ten constituencies a total of 53,000 votes were wrongly added to that of President Mahama's.

The very next day on Tuesday December 11, 2012, at a rally at the Kwame Nkrumah Circle in Accra, the NPP again told Ghanaians that the EC has stolen over 100,000 votes from them.

Three days later, Friday December 14, 2012, Kwadwo Owusu Afriyie, NPPs General Secretary, also stated that the EC rigged the election in excess of one million votes for John Mahama. But the very next day, NPPs Minority Leader in Parliament, Osei Kyei-Mensah-Bonsu, stated at a rally in Kumasi that the NPPs findings have revealed that over 150, 000 votes were added to that of President Mahama in the elections.

Please note: The NPP started from 36,000 to 53,000 to 100,000 to over 1 million and back to 150,000. But on the day the NPP presented its petition to the Supreme Court, they held a press conference and informed Ghanaians that over 1.34 million votes were stolen, therefore, they called on the Supreme Court to throw away those numbers.

It however did not take long when Gabby Otchere Darko, the man who acts as Akufo-Addo's brain came out to state that the votes that the NPP is contesting has ballooned to 1.7 million.

Is it therefore, any wonder that the NPP folks are today telling Ghanaians that 4,670,504 votes which represents 42.48% of the 10,995,262 votes declared as valid votes on December 9, 2012 have to be thrown away in order to pave the way for Akufo-Addo to be declared the winner and president-elect of Ghana?

Please do not be surprised if we wake up tomorrow and the NPP files another amended petition praying the Supreme Court to throw away all the votes cast in the 8 regions that President Mahama won and just go with the 2 regions that Akufo-Addo won. I bet that before the Supreme Court determines the case, the NPP will surely come back again and inform Ghanaians that they have uncovered more evidence of electoral fraud against President Mahama. The goal post shifting by the NPP goes on.

Have Confidence In Me, I'm An Honest Leader — Akufo-Addo
23 minutes ago