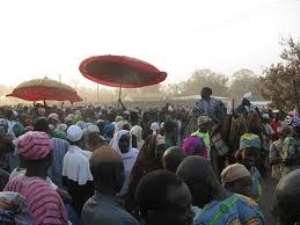 Tamale, Feb. 1, GNA- The chiefs and people of the Northern Region, have celebrated Damba, an annual festival to signify the birth of Prophet Mohammed, Founder of Islam.

Most of the revelers were dressed in smock amidst drumming, dancing and musketry.

Most of the chiefs in Tamale Metropolis clad in traditional regalia gathered at the Dakpema Palace to observe the festival accompanied by warriors adorned with amulets and loud music.

Dakpema Naa Dawuni Alhassan called for peace, unity and understanding among the people, which he said is the cardinal principle in attracting investors to facilitate the accelerated development of the area.

He called on the youth to be law abiding and eschew acts of indiscipline and embrace education as the best way to achieve their future dreams.

Naa Alhassan said the festival was not a license for anyone to engage in acts of lawlessness.

The celebration, which started at 1700 hours, disrupted traffic flow in Tamale.