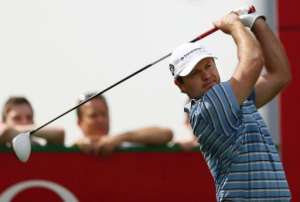 DUBAI (AFP) - South Africa's Richard Sterne came within one shot of the 19-year-old course record at the Emirates Golf Club on Thursday to lead the Dubai Desert Classic with a brilliant opening-round 10-under par 62.

Sterne made the most of the ideal playing conditions in the morning on the Majlis course.

After making 10 birdies in his first 16 holes, he parred his last two to fall one short of his compatriot Ernie Els' effort of 61 way back in 1994.

But it helped him take a one-shot lead over Scotland's Stephen Gallacher, who made two eagles and seven birdies in his 63.

European Tour Race to Dubai leader Scott Jamieson, Chris Doak (both Scotland) and England's Tommy Fleetwood were tied third at seven-under par 65, while Paul Casey and Matteo Manassero were among six players tied for sixth place at 66. As many as 94 players submitted sub-par cards in the 132-man field.

Former world No.1 Lee Westwood of England felt his decision to shift his residence to Florida was vindicated when he started his 2013 season with a bogey-free round of five-under par 67, although it still left him five shots off the pace.

World No.14 Sergio Garcia was one behind Westwood at 68, while defending champion Rafael Cabrera-Bello started his campaign with a 69.

Sterne, playing his first tournament of the season, made 10 birdies in a flawless round.

The world No.165, whose career was almost derailed by back injuries a couple of years ago, said: "It's as good a start as I could have hoped for. These guys these days, the depth is so much more than it used to be. The field is not as strong as it always is here, which I suppose is a good thing, but the guys can still play.

"I hope the back problem is pretty much over. Last year, I played every tournament I wanted to and didn't have to pull out of any.

"So hopefully this year, same thing will happen, no trouble, really. I've just got to maintain things and got quite a lot of work from my physios to keep me going, but it's been good."

Gallacher obviously loves this golf course. Last year, he made a hole-in-one, his third career ace and all have come at this very course, and won a Mercedes Benz as a prize.

"I finished second last year and had a couple top-10s. So yeah, I like the course, it suits my eye," said the 39-year-old Scotsman. "Some great conditions, as well, and the greens are there for holing putts. It wasn't too windy this morning."

Westwood was delighted with his first competitive round of the season.

"I really enjoyed it. You never know, start of the new year, but I played very nicely. I have a few new clubs in the bag, woods and putter, and they all behaved," said Westwood, a three-time runner-up in the tournament.

"I felt very sharp, made some nice putts, and I played better today than I finished off the last few tournaments so really pleased with that."