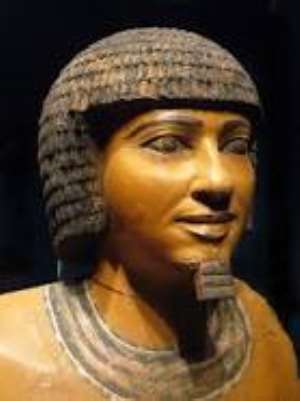 This is because of a gross European type education system, which has resulted in the overwhelming majority of Ghanaians not knowing of the great achievements of their ancestors and believe that everything they see around them has been invented/conceived by people other than themselves.

The essence of this feature is to uncover this grand deception by masking the truth which is that the discipline of medicine, despite all the European hype over “modern medical science technology” is in fact Afrika's gift to the world with one person to give homage to.

The person with whom we must pay great homage to for his outstanding innovations in the field of medicine is an Afrikan multi-genius called IMHOTEP – How many Ghanaians have heard of the name IMHOTEP?????

Even kings and queens bowed at his throne. Imhotep lived during the Third Dynasty at the court of King Zoser in Ancient Egypt which was a civilization and culture of the highest order conceived by Afrikan people.

Imhotep was a known scribe, chief lector, priest, architect, astronomer and magician (medicine and magic were used together.) For 3000 years he was worshipped as a god in Greece and Rome. Early Christians worshipped him as the "Prince of Peace."

Imhotep was also a poet and philosopher. He urged contentment and preached cheerfulness. His proverbs contained a "philosophy of life." Imhotep coined the saying "Eat, drink and be merry for tomorrow we shall die."

When the Egyptians crossed the Mediterranean, becoming the foundation of the Greek culture, Imhotep's teachings were absorbed there. Yet, as the Greeks were determined to assert that they were the originators of everything, Imhotep was forgotten for thousands of years and a counterfeit figure, Hippocrates, who came 2000 years after him became known as the Father of Medicine.

It is Imhotep says Sir William Osler, who is the real Father of Medicine. "The first figure of a physician to stand out clearly from the mists of antiquity." Imhotep diagnosed and treated over 200 diseases, 15 diseases of the abdomen, 11 of the bladder, 10 of the rectum, 29 of the eyes, and 18 of the skin, hair, nails and tongue. Imhotep treated tuberculosis, gallstones, appendicitis, gout and arthritis. He also performed surgery and practiced some dentistry. Imhotep extracted medicine from plants. He also knew the position and function of the vital organs and circulation of the blood system.

The Encyclopedia Britannica says, "The evidence afforded by Egyptian and Greek texts support the view that Imhotep's reputation was much respected in early times...His prestige increased with the lapse of centuries and his temples in Greek times were the centers of medical teachings."

“In priestly wisdom, in magic, in the formulation of wise proverbs; in medicine and architecture; this remarkable figure of Zoser's reign left so notable a reputation that his name was never forgotten. He was the patron spirit of the later scribes, to whom they regularly poured out a libation from the water-jug of their writing outfit before beginning their work. The people sang of his proverbs centuries later, and 2500 years after his death, he had become a god of medicine in whom Greeks, who call him Imouthes, recognized their own Asclepius. A temple was erected to him near the Serapeum at Memphis, and at the present day, every museum possesses a bronze statue or two of the apotheosized wise man, the proverb maker, physician, and architect of Zoser”.

Imhotep, the Prince of Peace, the Egyptian inventor of medicine and healing was a real historical Afrikan genius who received the book of healing from the mysterious forces of ancient ancestral Afrika.

This book was later given to the world and it forms the basis of modern medicine and surgery that is practiced all over the world.

The entire ancient world, including the ancient Greeks celebrated this venerable old man of wisdom who was synonymous with ingenuity. Even Hippocrates the so called Greek Father of modern medicine was a devotee of Imhotep the Prince of Peace.

Scientists examining documents dating back more than 3,500 years have confirmed that the origins of modern western medicine lie in ancient Afrikan Egypt and not with Hippocrates and the Greeks. The medical papyri were written in 2,500BC, at least more than 1,000 years before Hippocrates was born.

The medical documents were first discovered in the mid-19th century but then suppressed because it demonstrated facts which were antithetical to the official but hypocritical anti-Afrikan attitudes which then prevailed.

According to one of the scientists, Dr Jackie Campbell:

“Classical scholars have always considered the ancient Greeks, particularly Hippocrates, as being the fathers of medicine but our findings suggest that the ancient Egyptians were practicing a credible form of pharmacy and medicine much much earlier,”.

“Many of the ancient remedies we discovered survived into the 20th century and, indeed, some remain in use today, albeit that the active component is now produced synthetically.”

More on Imhotep:
Imhotep was the world's first named physician, and the architect who built Egypt's first pyramid. He is undisputedly the world's first doctor, a priest, scribe, sage, poet, astrologer, a vizier and chief minister, to Djoser (reigned 2630 - 2611 BC), the second king of Egypt's third dynasty.

An inscription on one of that king's statues gives us Imhotep's titles as the “the prince of peace,” “chancellor of the king of lower Egypt,” the “first one under the king,” the “administrator of the great mansion,” the “hereditary Noble,” the “high priest of Heliopolis,” the “chief sculptor,” and finally the “chief carpenter”.

As a builder, Imhotep is the first recorded master architects. He was the first pyramid architect and builder, and among his works one counts the Djoser's Step Pyramid complex at Saqqara, Sekhemkhet's unfinished pyramid, and possibly the Edfu Temple. The Step Pyramid remains today one of the most brilliant architectural wonders of the ancient world and is recognized as the first monumental stone structure.

Imhotep was also the first known physician, medical professor and a prodigious writer of medical books. As the first medical professor, Imhotep is believed to have been the author of the so-called Edwin Smith Papyrus in which more than 90 anatomical terms and 48 injuries are described.

He also founded a school of medicine in Memphis in Egypt possibly known as “Asclepius, which remained famous for two thousand years. Again more importantly, the so-called Hippocratic Oath with which newly qualified doctors swear homage to is actually called the Imhotep Oath written by the great man himself.

All of this occurred some 2,200 years before the Western Father of Medicine Hippocrates was born, making erroneous the suggestion that Hippocrates is the father of medicine.

Devotees bought offerings to his medical and spiritual school in Saqqara, including mummified Ibises and sometimes, in the hope of being healed.

He was later even worshipped by the early Christians as one with Christ who was made to adopt one of the titles of Imhotep, “the Prince of Peace”. The early Christians often appropriated those pagan forms and persons whose influence through the ages had woven itself so powerfully into tradition that they could not omit them.

He was worshiped in Greece where he was identified with their god of medicine, Asclepius. . He was honored by the Romans and inscriptions praising Imhotep were placed on the walls of Roman temples. Most surprisingly, he even managed to find a place in Arab traditions, especially at Saqqara where his tomb is thought to be located.

Materia Medica:
The ancient Egyptian physicians treated wounds with honey, resins (including cannabis resin) and elemental metals known to be antimicrobial. This practice is still a valid medical protocol even today.

Again, just like in these modern times, the prescriptions for laxatives included castor oil and colocynth and bulk bran and figs were used to promote regularity.

Other references show that colic was treated with hyoscyamus, which is still used today, and that cumin and coriander were used as intestinal carminatives.

Musculo-skeletal disorders were treated with rubefacients to stimulate blood flow and poultices to warm and soothe similar to the practices of modern practitioners of sports medicine.

Interestingly, certain remedies prescribed by Egyptian physicians were way ahead of modern anticipation. For instance, celery and saffron which were used for rheumatism are currently hot topics of pharmaceutical research, and pomegranate was used to eradicate tapeworms, a remedy that remained in clinical use until 50 years ago.

Acacia is still used in cough remedies while aloes forms a basis to soothe and heal skin conditions. The knowledge and the uses of essential oils and resins were introduced to the world by the ancient Afrikan Egyptians.

The early Egyptians appear to have been the first to recognize that stress could contribute to illness. They established sanitariums where people would undergo “dream therapy” and treatments with “healing waters.

Altogether, around 50 percent of the plants used in ancient Egypt remain in clinical use today.

Many of the medical and surgical instruments such as knives and forceps have not changed their design since the ancient Afrikans first sent out this knowledge to the world. Today, researchers are still discovering “new” cures based on old Egyptian remedies, such as eating celery to help curb inflammation associated with arthritis.

Roots of Kemitic/Egyptian Knowledge:
The study further conducted genetic and chemical analysis on plant remains and resins, with the goal of identifying trade routes, which species were used and how these plants might have been cultivated outside their natural growing ranges.

After detailed facts gathering and analysis the scientists proposed that the Afrikan Egyptians obtained their medical knowledge from nomadic Afrikan tribes that united to form ancient Egypt, as well as from neighbouring Afrikan people in Kush (present day Ethiopia) and beyond.

Current medical practices by the living Afrikan societies and traditions still show similarities to Ancient Egyptian medicine. The continued use by African natural Doctors of medicinal herbs and animal products, and practices such as cosmetic dental filing, brain trepanning, orthopeadic procedures, known to ancient Egyptians suggest sustained scientific and religious interaction in the past.

Alas, current studies are revealing that the knowledge of medicine was transferred from central West Africa to Egypt, just like everything else that was gifted from Kush to Kemet.

Since the knowledge of Egyptian medical science was from inner Afrika, more precisely central and western Afrika, the world owes Afrika and its children a belated tribute, a sound recognition for having bequeathed the science of healing, hygiene and the gift of medicine to later cultures and civilizations who still owe the unrequited debt of appreciation for Afrika's beneficence.