Keta industrial salt estate to be established this year 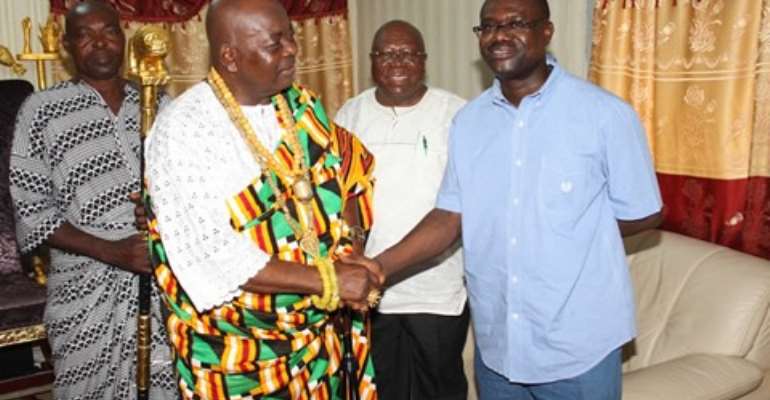 The Awoemefia of Anlo state, Togbui Sri III in a handshake with Mr. Agyepong, looking on are some elders of the Anlo State

Government of Ghana in partnership with Zoomlion Ghana Limited, is to establish an Industrial Salt Estate at Keta in the Volta Region, to produce sufficient volumes of salt to support the country's petrochemical industry.

“The Keta Industrial Salt Estate is going to generate and support the downstream petrochemical and industrial sector,” CEO of Zoomlion Dr. Joseph Siaw Agyepong disclosed, when he paid a courtesy call on the Awoemefia of the Anlo state, Togbe Sri III at his residence in Keta.

The first phase of the salt project estimated at $191 million is expected to produce about 600,000 metric tonnes annually within the first four years, while the second phase starts in the fifth year with an estimated volume of 1.2 million metric tonnes after other communities are added to the present list.

Dr. Agyepong explained that the Volta region is economically viable and as a result, his outfit is highly elated to be associated with the Keta Industrial Salt estate.

He said the recent oil find in the area called for massive salt production to feed the industry, which is expected to start by the end of 2013 adding, that Keta has enough natural resources to be transformed into an industrial hub.

He expressed gratitude to the Awoemefia for his blessings and pledged that the board of the project would be structured in a way that will give the Anlo State equity.

“This project is going to be more localized to ensure that people in the volta region derive maximum benefits,” Dr. Agyepong assured.

The Awoemefia of the Anlo state togbui Sri III received Dr. Joseph Siaw Agyepong and his entourage in the company of his Togbe Agbesi Awusu, war lord of the Anlo State and Togbe Gbodzor of Woe, right wing chief of Woe and other chiefs and elders.

They welcomed the idea and expressed optimism that the project would open the area up to development.

He however expressed concern over the environmental challenges associated with salt mining and cautioned the project managers to ensure that the Keta Industrial Salt estate becomes a blessing and not a curse.

“My plea is that you will be extremely vigilant so that your good ideas may not cause any hazards in my town”.

The CEO of Zoomlion and his entourage made of up Ghana's Ambassador to Malaysia, Dan Abodakpi, MP for Keta Richard Quashigah and a technical team later engaged the opinion leaders in Keta in a meeting at the office of the Keta Municipal Assembly.

The MP for the area Richard Quashigah expressed confidence in the project explaining that, it will improve the employment opportunities in the area.

He added that the salt could be converted into caustic soda for aluminum production and assured that all risk assessments have been carried out and therefore the project will not affect the livelihood of the people.