Calm returns to Teshie Cluster of schools after rumour 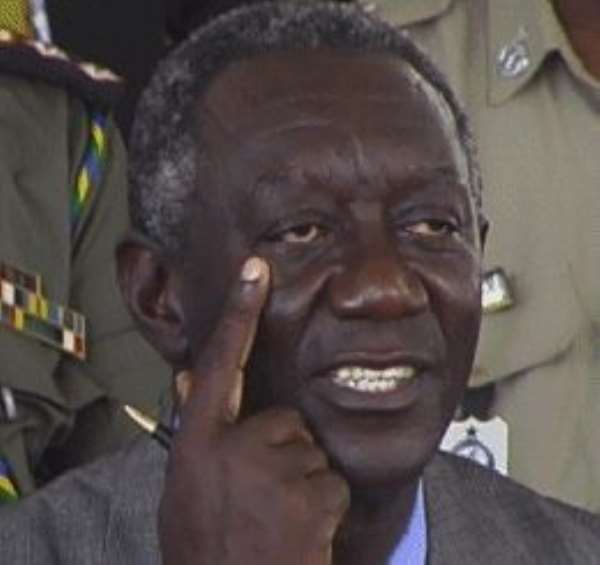 Accra, Nov. 10, GNA - Classes have resumed at the Teshie Cluster of School, which was closed down when parents rushed there and threatened to lynch the teachers for allowing the blood samples of the children to be taken.

The rumour had it that the mother of President John Agyekum Kufuor had been hospitalised and needed blood hence the exercise to test the blood to get the most suitable for her.

The parents had gone to school on Friday October 24 because they were misinformed about an exercise carried out by the Environmental Protection Agency (EPA) to test the effects of exhaust fumes on the children.

Nsowah, Deputy Director General, Quality and Access of the Ghana Education Service (GES), who visited the schools on Monday, pledged Government's support and protection for the teachers. He told the teachers "we would not sleep whilst you are being chased" and expressed the hope that there would be continuous sanity in the school.

"We hope we will not see a recurrence," he said, and called on the teachers to contact the GES and the Ministry of Education, Youth and Sports should anything occur again.

Mr Nsowah said the Government was concerned about the lives of school children, whose schools were located near fuel stations and close to main roads because the dust and exhaust fumes produced by vehicles could have hazardous effects on the children.

He explained that it was out of this concern that the GES permitted the EPA to carry out an exercise to sample the blood of the children to determine the quantum of lead in their bloodstream.

Mr Nsowah commended Mrs Rose Ankrah, Accra Metropolitan Director of Education, Teshie Traditional Council and the Parent Teacher Association for their roles in ensuring that peace returned to the schools.

Giving a background to the incident, Mrs Ankra said rumours were awash in Teshie on Friday October 24 that the teachers had gone to bring some strange people to drain the blood of some of the children for ritual purposes and during the exercise three pupils had died and were kept in cupboards in the school.

Mrs Ankra said the Police and Soldiers had hectic time bringing the situation under control and when she ran to the school on Monday October 27 all doors were locked and no teaching and learning were going on. She said the teachers had earlier resisted going back to the school for fear that they might be threatened again and asked that the schools should be closed down until January 2004.

However, at a meeting held on October 29 involving parents, stakeholders, Teshie Presbyterian Church, Assembly Members and the Traditional Council, the parents expressed shock and dismay and were remorseful when they realised that they had acted on misinformation. She said the parents later sent a letter of apology to her and promised not to repeat their action.

Mrs Ankrah said she had charged the Assembly Members and the Chairman of the Education Sub-Committee of AMA to arrange for protection for the teachers.

Mrs Elizabeth A. Ofori, Circuit Supervisor, said and none of the children and teachers was hurt neither was any property destroyed. Mr Moses Johnson Nii Noi-Anyetei, Chairman of the School Management Council and Executive Member of the Kpeshie PTA, said the Traditional Council had promised to educate the people against such acts, adding that parents who did not want their children to undergo such blood sampling and wanted to withdraw them could do so.