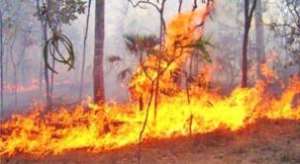 The Brong-Ahafo Regional Forestry Commission estimates a loss of about GH¢1,185,035 being cost of destruction and suppression of bushfires.

This was contained in a report issued by the Brong-Ahafo Regional Anti-bushfire Committee in Sunyani on Monday after its outreach programme, which afforded the committee an opportunity to identify loopholes at the district level and to make useful suggestions to stakeholders.

'Most of the municipalities and districts promised to take bushfire issues very serious and hope to improve their performance this year, 'it added.

The report said some of the properties and items destroyed were forest reserves (forest and wildlife resources) houses, cash and food crops such as cashew, cocoa, yam, maize, rice, plantain, cocoyam and cassava.

It said 12 casualties were recorded on the Sunyani-Nsoatre road when two vehicles were involved in a road crash and burnt as a result of bushfire.

The report said Fulani herdsmen, group hunters, charcoal producers, activities of smokers and farmers were the major causes of bushfires in the Region.

'Chop-bar operators that use bush meat encouraged hunting during the dry season,' it added.

The report pointed out that weak enforcement of laws on bushfires had been a major contributing factor for the increase in bushfires outbreak in the Region.

It recommended the establishment of anti-bushfire committees made up of the Unit Committee, chiefs, assembly members, fire volunteers and stakeholders to enhance community participation for effective bushfire campaign.