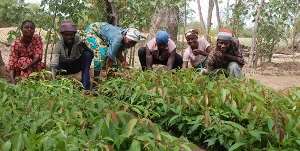 Tamale, Jan. 29, GNA - Ghanaian farmers have been advised to patronise locally produced high yielding seeds that are more reliable, cheaper and readily available, instead of imported seeds that are expensive and cannot be used a second time from the parent stock.

Dr Roger Kanton, a Research Scientist of the Savannah Research Institute (SARI), gave the advice in Tamale, at the weekend, at an annual review meeting of the Adaptation Learning Programme (ALP).

The meeting that was under the auspices of CARE International, a non-governmental organisation, attracted farmers from eight communities in the Garu-Tempane and East Manprusi Districts and ALP working partners, to reflect on the implementation of the programme, during the past year, share and explore innovative ways of achieving its objectives.

Dr Kanto explained that apart from the local high bred seeds of maize such as 'Dadaba',' Mamaba' and 'Obaatampa' that had been tried and tested by farmers, other new varieties that were highly nutritious, early maturing, draught tolerant  and striger (a weed that hinders the growth of the plant) resistant,  were readily available.

Others include,  'Abonten', a yellow maize variety that matures early, within 80 to 85 days,' Omankwa', also early maturing and 'Aburohemaa'.

He said local research findings had shown that a combination of organic manure and chemical fertilizer in the right quantities with the appropriate farm management practices,  gave good yield.

Dr Kanton said this could be adopted by farmers in the northern part of the country since many of them could not afford enough chemical fertilizer for their crops.

Commenting on Genetically Modified Organisms (GMO), Dr Kanton said since the country had not done any research on the safety of GMO foods, it would be safer to avoid the edible products especially as it would corrupt the local crop breed and make farmers dependent on  imported GMO seeds.

However, he said the opposite could be said about cotton, which was not edible.

Dr Kanton said GMO cotton was cheaper to produce and gave far better yield than the local type while the local cotton plant needed to be sprayed six times during its growth on the farm, and the PT cotton which is GMO, needs to be sprayed only twice.

In a discussion about the use of herbicides, which is widely used by farmers in some parts of the Northern and Upper East regions, Dr Kanton cautioned farmers  to be careful about what they use, saying that though it reduces cost of labour, careless use of it could be dangerous to the people and the environment.

He urged farmers to seek help from agriculture extension officers to understand how and in what quantity chemicals should be used on the farms as too much application of the various pesticides on vegetables could do more harm than good to consumers.

The Adaptation Learning Programme (ALP) is working in eight communities in the East Manprusi and Garu-Tempane Districts to create awareness about climate change and its effects and help farmers to plan adaptation actions that are informed by climate science and local observation of climate change.