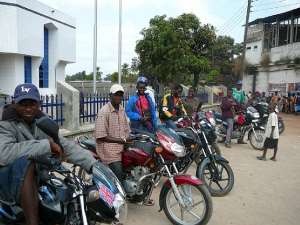 The recent ban on motorcyclists popularly known as Okada by the Lagos State Government on 475 roads in the metropolis indicated another infamous creation of armed robbers in the state.

The enforcement of its new traffic law restricting the operations of commercial motorcycles a.k.a Okada on the some of the restricted routes could add another round of congested traffic hold ups in state.

Over 3000 motorcyclists have been seized by the law enforcement officials, yet Okada riders still ply some of the restricted routes in the state. Okada offenders are not left out in terms of arresting them on Okada riding.

Though many Lagosians thought that the state government would have swung on the tenancy law on exorbitant house rents in the state by dodgy house owners than total banning of Okada riders in the state without alternative means of surviving.


Though Governor Fashola of Lagos State asserted a point of banning Okada in the state due to multiple accident victims and incessant robbery cases that followed Okada riding in the state. Since the ban of Okada in some of the restricted routes in the state. federal, state and private hospitals have been totally reduced of Okada accident victims in terms of bone dislocation and premature deaths.

The worst is that local government officials are also arresting Okada riders in the state without directives from the state government.

The population of Lagos State is over 18 million people which the numbers of BRT buses, tricycles and Danfo buses are not enough to solve transportation problem coupled with the ever-increasing population in the state and vehicular and human congestion.

The ban on Okada riders would create havoc in the state. Most of the inner roads that Okada riders are plying presently are not enough to mint money to cater for immediate families upkeep.25 percent of people living in Lagos are mere Okada riders and petty traders.

As the case may be, no profession where bad eggs would not be among the saints. The fact remains that Okada has helped in one way to create jobs for some of the frustrated Lagosians and contribute economically to the developmental progress of the state. Okada riders pay daily taxes to the local government of the state and others.

Even the Lagos State Road Traffic Management Authority (LASTMAS) and other security officers have succeeded in arresting innocent and hapless Okada riders with no just cause. In some areas like Ajegunle, Apapa, Iyashsi, Okokomaiko, Mile 2, Mile 12, and others where police officers arrest illegal Okada riders and demand bail of #5000 to #10,000 from the victims before their Okadas would be released to them.

The question many Lagosians are presently asking Governor Fashola of Lagos State is that his administration in the second tenure is beyond the reach of the poor coupled with the sudden increase of tuition fees of state higher institutions. His policies are unfavorable to the people of the state.

It is glaring that Babatunde Fashola abysmally failed to effect tenancy law which the cost of getting accommodation in the state is high comparing to other states of the federation. Apart from Okada being used to rob innocent people in the state, buses popularly known as' Danfos are not left out in terms of criminal activities.

Again Babatunde Fashola should know vividly that the banning of Okada riders without placing total ban of tout boys known as' Agberos' would go a long way in discrediting Lagos State Government policies.

The massive exploit of Agbero boys on bus drivers and other vehicular transportation in the state is another severe issue which the government has failed to tackle rather chasing after innocent Okada riders of their livelihood. Not all Okada riders are criminals. Okada riding was created in the military administration of Rt. Gen Ibrahim Babangida that failed to create jobs for the youths in the country.


The purported closure of some markets in Lagos State by the Commissioner of Environment over unkempt form of trading in the state is a welcome development but total closure is not the best.Milliions of naira have been lost while traders and consumers are now living in the mercy of God over sudden increase of consumable goods in the state.

Even though Governor Fashola recently won the court suit filed against Okada Riders Association in the state that does not mean, he would not create alternative means of surviving in Lagos State rather being lynched by law enforcement officers in the state.

Too many law enforcement agencies being created by former Governor of the state, Ahmed Bola Tinubu and Fashola have succeeded in generating funds for the state and not creating enabling environment for Lagosians.

The fear of Fashola is the beginning of people relocating to their various communities in Nigeria. To the extent that some state governors have decided to toe in the path of Fashola's law to ban Okada riding in their states while alternatively introducing tricycles and power motorcycles for Okada riders without considering the cost implication or resultant effect.

Though Okada riding is risking in spite of helmet and other forms of protection introduce to Okada riding but tricycle is protected than Okada. The cost of purchasing tricycles and power bikes are costly than ordinary Okada that goes between #90,000 to #120, 000 while the former goes to #250,000 to #350,000. Some of these Okada riders and tricycles are under hire purchase and daily delivery of money to the owners.

Ultimately, If Fashola brings his own Okada to the state as rumors is making the round of importing power bikes to the state, then the validation of banning Okada riders in the state is conquered. All security officers must be cautioned by the state government over needless arrest of Okada riders in non restricted routes.

If lotto game known as “Baba Ijebu” was not introduced by a businessman in the state, then the state of robbery cases would have increased by now. Let Fahola opens all the markets closed down while alleged payment of millions to open the markets is in the news. Corruption must be dealt with now. Those that come to equity must come with clean hands.