S. Africa billionaire to give half his wealth to charity 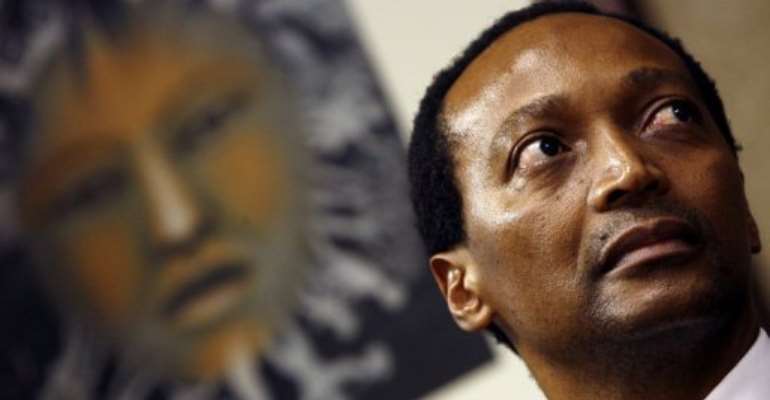 South African businessman Patrice Motsepe on May 07, 2008 in Sandton. By Gianluigi Guercia (AFP/File)

JOHANNESBURG (AFP) - South African mining billionaire Patrice Motsepe announced Wednesday he would give half his family's fortune to charity, becoming the first African to match a pledge made by Bill Gates and Warren Buffett.

The Soweto-born tycoon, worth an estimated $2.7 billion (two billion euros), announced he would join the Giving Pledge, which challenges the world's wealthiest to give at least 50 percent of their fortune to charity.

"The need and challenges are great," Motsepe said in a statement, pledging to give away "at least half of the funds generated by our family."

A close aide told AFP it was difficult to put a figure on the amount that would be donated, but it would be "half of all his wealth, both current and future".

"There's no period. This will go on into perpetuity."

The money, Motsepe said, would be used to help "poor and other disadvantaged and marginalised South Africans".

"It would not significantly deal with the challenges that face our country," he added.

Despite having the continent's largest economy, over half of South Africa's 52 million people live below the poverty line, according to official figures.

"We hope that our Giving Pledge will encourage others in South Africa and other emerging economies to give and make the world a better place," said Motsepe.

The 51-year-old made his billions through black empowerment deals, designed to redress white economic dominance that stemmed from apartheid laws.

He founded and owns mining company African Rainbow Minerals (ARB) and is Africa's eighth richest person according to Forbes magazine.

ARB had revenue of $228 million in the third quarter of 2012, from its extensive gold, platinum, iron ore and coal operations in South Africa and copper interests in Zambia and the Democratic Republic of Congo.

Motsepe owns a controlling stake in the company.

The donation will go to the Motsepe Family Foundation, which he set up with his wife, Precious, in 1999.

The organisation works to improve education, agriculture and upliftment programmes.

The Motsepes are a high profile couple in South Africa and are often spotted at A-list social events.

His sister is married to Cyril Ramaphosa, one of South Africa's richest men. Ramaphosa was recently elected deputy leader of the ANC and is touted to become the country's next deputy president.

Motsepe said the donation was the recognition of people's help in his own life.

"I was also a beneficiary of various people, black and white, in South Africa and in the US who educated, trained, mentored and inspired me."

He used the pledge to call for better governance on a continent beset by mismanagement and corruption.

"Economies that are growing and have ethical and accountable political, business and other leaders are better positioned and substantially more effective in dealing with poverty, joblessness, illiteracy and disease," he said.

Since Microsoft mogul Gates and investment guru Buffett launched the Pledge in 2010, more than 70 billionaires have joined.

Motsepe thanked Buffett and Gates personally for their encouragement during separate meetings last year which he said influenced his decision.