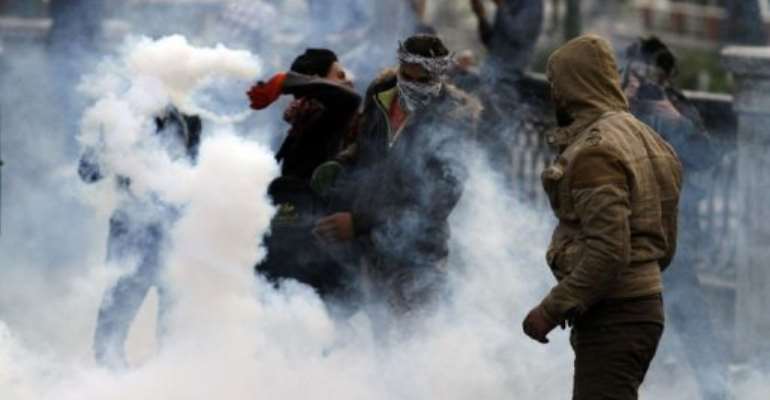 An Egyptian protester throws a tear gas canister back towards riot police during clashes in Cairo on January 29, 2013. By Mohammed Abed (AFP)

"We want an immediate meeting between the president, the ministers of defence and interior, the ruling party, the Salafist movement and the National Salvation Front to take urgent measures to end the violence and begin a serious dialogue," ElBaradei said in a tweet.

His call comes two days after the opposition rejected President Mohamed Morsi's call for dialogue to resolve the crisis.

Egypt has witnessed almost a week of deadly violence which has left more than 50 people dead, most of them in Port Said where clashes erupted Saturday after a court issued death sentences against 21 supporters of a local football club for their role in deadly riots last year.

The National Salvation Front indicated Wednesday that some of its leaders would meet during the day with representatives of the main Salafist party, Al-Nour, in response to an invitation from the ultra-conservative Islamist group to discus the "deterioration of the situation."

Egypt's military chief on Tuesday warned that the political crisis could lead to the collapse of the state.

"The continuing conflict between political forces and their differences concerning the management of the country could lead to a collapse of the state and threaten future generations," said General Abdel Fattah al-Sissi.