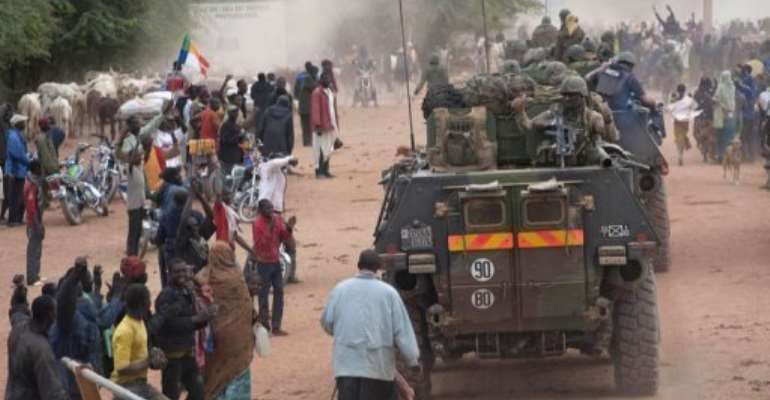 People wave as French and Malian soldiers enter the historic Malian city of Timbuktu on January 28, 2013. By Arnaud Roine (ECPAD/AFP)

LONDON (AFP) - Britain said Tuesday it is ready to boost the number of military personnel helping the French-led mission in Mali to over 300, adding that it was necessary to deny Al-Qaeda the chance to attack the West.

Defence Secretary Philip Hammond said Britain had offered to contribute up to 40 personnel for a European Union training mission in Mali, and up to 200 for a separate training force in neighbouring English-speaking West African nations.

Playing down fears in Britain of being drawn into another Afghanistan-style quagmire, Hammond denied there was "mission creep" and told parliament that none of the troops would be deployed in a combat role.

A further 20 British personnel have already been deployed to operate a Royal Air Force C-17 cargo aircraft supporting the French mission in Mali, while 70 are deployed outside Mali, in Senegal, to operate a Sentinel surveillance plane.

Britain has also offered France the use of a roll-on roll-off ferry to transport vehicles and equipment from France, Prime Minister David Cameron's spokesman said, without saying how many personnel that would involve.

"The UK has a clear interest in the stability of Mali and ensuring that its territory does not become an ungoverned space available to Al-Qaeda and its associates to organise for attacks on the West," Hammond said.

"It is not our intention to deploy combat troops.

"We are very clear about the risks of mission creep and we have defined very carefully the support that we are willing and able to provide to the French and the Malian authorities."

Britain also offered £5.0 million pounds ($7.86 million, 5.84 million euros) at a donor conference in the Ethiopian capital Addis Ababa on Tuesday for the strengthening of security in Mali.

Of that, £3.0 million will go towards the African-led force for Mali (AFISMA) and £2.0 million to "activity in Mali that would facilitate and support political processes for building stability."

Cameron's spokesman said Britain had made the offer to contribute to the European Union training mission at a meeting of defence attaches from the 27 EU member states in Brussels on Tuesday.

Britain said it expected "force protection arrangements" to be put in place either by the French or the EU, adding that the role of its own troops "will also not extend, as we envisage it at the moment, to a force protection role."

"I can assure the House that we will not allow UK personnel to deploy on any mission until we are satisfied that adequate force protection arrangements are in place," he said.

Britain has until now only provided transport planes and a surveillance plane to assist French forces fighting the Islamist insurgency in northern Mali.

The sudden increase in the number of troops announced on Tuesday has prompted questions about whether Britain is being drawn into another fight like the nearly 12-year war in Afghanistan.

Britain currently has around 9,000 troops in Afghanistan. It will lower that number to 5,200 by the end of 2013, before NATO makes the full handover of security to Afghan forces at the end of 2014.