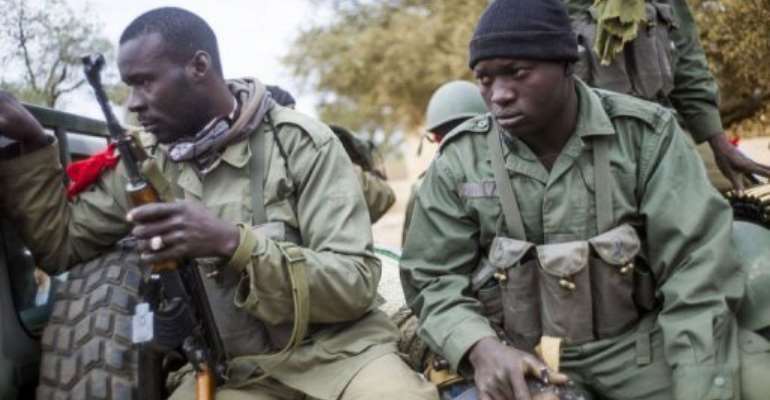 Malian soldiers wait at a checkpoint near Sevare on January 27, 2013. By Fred Dufour (AFP)

A building housing tens of thousands of manuscripts from the ancient Muslim world and Greece was set aflame, raising fears of further damage to the country's cultural heritage after months of destruction by radical Islamists.

French paratroopers swooped in to try to block fleeing hardliners as ground troops coming from the south seized the airport of Timbuktu, which has been a bastion of the extremists controlling the north for 10 months.

"We control the airport at Timbuktu," a senior officer with the Malian army told AFP. "We did not encounter any resistance."

French army spokesman Colonel Thierry Burkhard told AFP the troops, backed up by helicopters, had seized control of the so-called Niger Loop -- an area hugging a curve of the Niger River flowing between Timbuktu and Gao -- in less than 48 hours.

A fabled caravan town on the edge of the Sahara desert, Timbuktu was for centuries a key centre of Islamic learning and has become a byword for exotic remoteness in the Western imagination.

The once cosmopolitan town became a dusty outpost for the extremists who forced women to wear veils, whipped and stoned those who violated their version of strict Islamic law, and destroyed ancient Muslim shrines they considered "idolatrous".

Timbuktu mayor Halley Ousmane, who is in Bamako, confirmed the fire at the Ahmed Baba Centre for Documentation and Research which housed between 60,000 and 100,000 manuscripts, according to Mali's culture ministry.

"I spoke to my media officer this morning. What has happened in Timbuktu is dramatic," he said.

Ousmane said he had been informed that Islamists had "burnt alive" a resident who had cried out "Vive la France".

The Ahmed Baba institute was set up in 1973. In 2009, a new building was opened following a bilateral agreement with South Africa to promote the conservation, research and promotion of the manuscripts as African heritage.

"A building housing the manuscripts was burned," a security source told AFP.

The advance into Timbuktu known as "the City of 333 Saints", which lies 1,000 kilometres (600 miles) north of Mali's capital Bamako, comes a day after French and Malian soldiers seized another Islamist bastion, the eastern town of Gao.

The French defence ministry said "several terrorist groups were destroyed or chased to the north" after the conquest of Gao.

Gao is the biggest of six towns seized by French and Malian troops since they launched their offensive on January 11 to wrest the vast desert north from the Islamists.

The largest town yet to be recaptured is Kidal further north near the Algerian border, which was the first to be seized by an alliance of Tuareg rebels and Islamic extremists in April last year.

The unlikely partnership between the independence-seeking Tuareg and sharia-driven Islamists quickly fell apart and the extremists took firm control of the north, sparking fears the zone could become a haven for terror groups.

In early January the Islamists broke through into the government-held south, raising fears that they could seize the capital Bamako and prompting intervention by former colonial power France.

Eighteen days after the intervention, France now has 2,900 soldiers in Mali.

Nearly 8,000 African troops from Chad and the west African grouping ECOWAS are expected to take over the baton from the French troops, but their deployment has been sluggish with 2,700 split between Mali and Niger.

The African-led force will require a budget of $460 million (340 million euros), the African Union said on the final day of its summit in Addis Ababa on Monday, promising to contribute $50 million for the mission.

A spokesman for British Prime Minister David Cameron said Monday that London was "keen" to contribute more in addition to two transport planes and a surveillance aircraft it has already provided.

On Monday a French helicopter carrier, the Dixmude, arrived in the Senegalese capital Dakar carrying hundreds of troops as well as vehicles and materiel to be transported to neighbouring Mali.

There have been reports of reprisal attacks and the killing of Tuaregs, a Berber people, and Arabs leading the rebellion against Bamako by Malian soldiers and the local people.

"We have already witnessed reprisals ... and thousands of people going into exile fearing for their lives," said Corinne Dufka, a researcher from Human Rights Watch, urging immediate action from authorities to lower tensions.