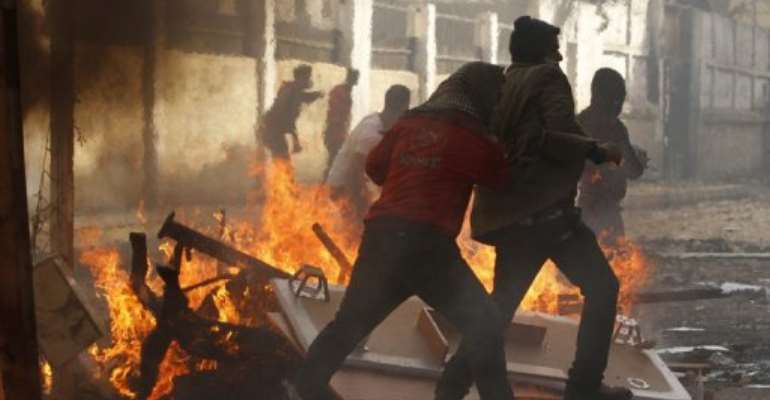 CAIRO (AFP) - Clashes killed at least 31 people in Egypt's Port Said as violence raged into the early hours of Sunday in several cities including the capital following death sentences passed on 21 football fans after a riot.

The unrest came after a day of deadly protests against Islamist President Mohamed Morsi, highlighting deep political divisions in the country and long-standing tensions between police and protesters.

Trouble flared just minutes after a court on Saturday handed down the death sentences against fans of Port Said club Al-Masry after 74 people were killed in post-match violence last February following a match with Cairo side Al-Ahly.

In Cairo, police clashed with protesters on the outskirts of Tahrir Square -- the symbolic heart of the revolt that ousted Hosni Mubarak in 2011 -- firing volleys of tear gas, witnesses said.

Demonstrators blocked the 6 October bridge, a vital flyover linking east and west Cairo, as police and masked protesters clashed on the Nile corniche.

Many Egyptians believe last year's deadly stadium riots in Port Said were orchestrated either by the police or by Mubarak supporters, and any verdict was likely to trigger a highly charged response.

Diehard Cairo football fans known as Ultras had threatened widespread chaos if justice was not served, but Port Said residents said the ruling was politically motivated.

Ultras were among the most vocal and active members of the opposition in the anti-Mubarak revolution.

"The government delivered a political ruling that sacrificed our children to avoid chaos," Ashraf Sayyed, who lives in Port Said, told AFP.

"Our children are the scapegoats used to restore calm in the rest of the country."

On Saturday, protesters in Port Said attacked police stations and relatives of those sentenced to death clashed with security forces as they tried to storm the Port Said jail holding the defendants.

Crowds stormed two police stations as the sound of gunshots crackled through the city, where shops and businesses had closed, an AFP correspondent said.

Ambulances ferried the injured to hospitals as mosques urged worshippers to donate blood.

The opposition, meanwhile, threatened to boycott upcoming parliamentary elections if Morsi does not find a "comprehensive solution" to the unrest.

The National Salvation Front, the main coalition of parties and movements opposing the ruling Islamists, said it would "not participate" in the polls unless a "national salvation" government was formed.

Egypt's national defence council, which is headed by Morsi, appealed for calm and called for dialogue with "independent national figures" to agree on a mechanism for the polls.

Inside and outside the court on Saturday there were explosions of joy at the football riot verdict. Women ululated, relatives hugged each other and shouted "Allahu akbar" (God is greatest).

"I am satisfied with the verdict," said a man whose son was killed in the Port Said violence.

Hassan Mustafa, who lost a friend in the riot, said he still wanted "justice served for those who planned the killing."