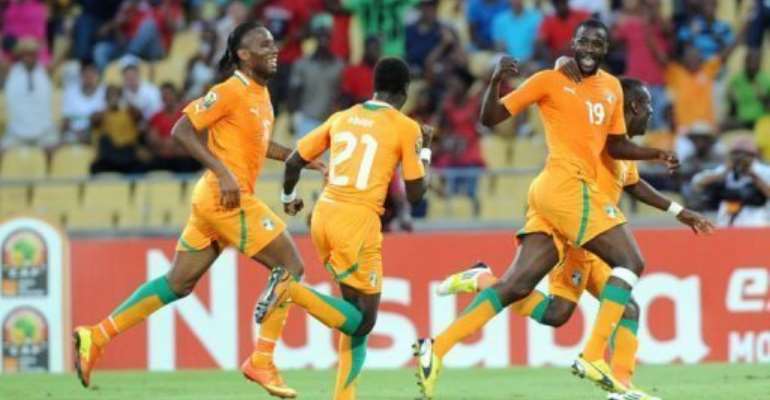 RUSTENBURG, South Africa (AFP) - Ivory Coast -- with considerable help from Togo -- turned on the style to qualify for the Africa Cup of Nations quarter-finals on Saturday as Algeria were knocked out.

Day eight's action came from Rustenburg, where the Ivorians bounced back from a below-par opening performance to power past Tunisia 3-0, the goals coming from Gervinho, his English Premier League colleague Yaya Toure, and late substitute Didier Ya Konan.

With Togo stunning former champions Algeria 2-0 in the late game, Ivory Coast were assured of top spot in Group D -- irrespective of results when the curtain comes down on this first round mini-league next Wednesday.

Togo, who had goals from Tottenham striker Emmanuel Adebayor and substitute Dove Wome to thank for their shock win over Algeria, now need only a draw against Tunisia to bag the runners-up spot.

While those two teams celebrated a good night's work at the Royal Bafokeng Sports Palace, there was understandable doom and gloom in the talented but inexperienced Algerian camp.

Coach Vahid Halilhodzic arrived at the traditional post-match press conference looking as glum as someone who had just won the lottery, only to discover his dog had eaten the ticket.

"I feel deeply ashamed. I don't know what happened tonight, it's hard to analyse.

"Perhaps the players weren't mature enough to compete at this level.

"But I won't accuse anyone, I made the choices. I just feel shame.

"My future as coach is not relevant, what is relevant is that we work out how we played that kind of football without scoring.

"I built a team to win, and we've lost our first two matches. They have a bright future, but there's still work to do."

He added: "It's understandable the fans are angry, they had high expectations."

Togo, who went within two minutes of keeping the Ivorians in check in their opening game, excelled to earn their first Nations Cup win since beating Cameroon 13 years ago.

Adebayor, who only answered his country's call after a protracted wrangle over bonuses, security and the state of Togolese football, cut a satisfied figure when he met the media.

"We had a good game against Ivory Coast but, unfortunately, did not win. We all came together to move forward and that shows that if everyone is united we can achieve great things."

Coach Didier Six did not waste words: "We were up against a very good Algeria team, The win was deserved. Togo had the ambition to win."

Adebayor, who hid under a seat when the team bus came under machine-gun attack before the 2010 Cup in Angola with two of the entourage killed, added: "It's always important to score at the Nations Cup. We knew we had to win after our first defeat. We attacked well, converted our chances. Now I hope there will be more reasons to celebrate."

He had promised a new, improved team to the one that laboured in the 2-1 win over Togo and, sure enough, the Elephants put up the best performance seen in South Africa since battle commenced.

"Why didn't I play Didier Drogba? Because it seemed to me that the 11 players I picked were the best to overcome this good Tunisian side," explained Lamouchi.

"My first satisfaction comes from the victory and the second from the content. We really entered this competition today.

"We caused a lot of problems for this very good Tunisian team and were never really threatened at any point."

Sunday's menu sees hosts South Africa face Morocco in Durban knowing a win or a draw will see them qualify, and Cape Verde take on Angola in Port Elizabeth simultaneously in the final throw of the Group A dice.