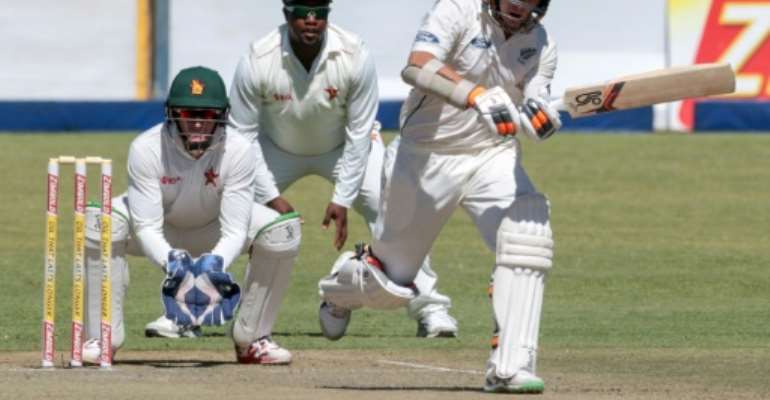 New Zealand batsman Tom Latham (R) plays a shot as Zimbabwe wicketkeeper PJ Moor (L) looks on during the first day of the second Test at the Queens Sports Club in Bulawayo, on August 6, 2016. By Jekesai Njikizana (AFP)

Bulawayo (Zimbabwe) (AFP) - Opening batsman Tom Latham closed in on his second consecutive century in Zimbabwe as New Zealand made a dominant start to the second Test in Bulawayo on Saturday.

Latham was unbeaten on 78 as New Zealand went to tea on the opening day on 206 for one after they won the toss and elected to bat.

The left-hander scored 105 in the first Test, which New Zealand won by an innings and 117 runs, and continued that good form on the first day of the second and final Test.

With Zimbabwe's pace-shy seamers failing to threaten on a placid pitch, Latham put on an opening partnership of 169 with Martin Guptill, who made 87.

The hosts finally made a breakthrough in the hour before tea, when Donald Tiripano snuck a delivery through Guptill's defences to trap him lbw.

The only other drama on the opening day saw Zimbabwe's fans stage a peaceful protest against President Robert Mugabe's government when they rose as one at the end of the 36th over to sing the national anthem.

The action was an initiative of the #ThisFlag citizen movement that has brought stayaways and public demonstrations across the country over the past six weeks.

Their call to action brought the biggest crowd that Queens had seen during the series.

The Zimbabweans made three changes to their side for the second Test, with wicketkeeper-batsman Peter Moor making his Test debut and opening batsman Tino Mawoyo and offspinner John Nyumbu also brought in.

Regis Chakabva, Brian Chari and the injured Hamilton Masakadza were the players to make way.

New Zealand announced an unchanged side from the one that won the first Test so easily, as Kane Williamson and Tim Southee earned their 50th Test caps.