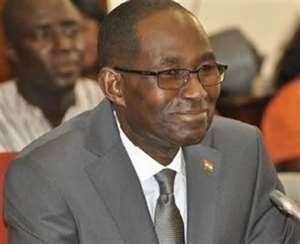 The outgoing Minister of Education, Ambassador Lee Ocran has noted that the future of the country depends on quality of education given to the pupils and that the provision of quality teaching and learning materials is the essential to the government.

He argued that most students fail exams not because they are not intelligence but the basic tools needed to impart knowledge on them are either woeful inadequate or not available which makes teaching and learning a problem for both teachers and students.

Ambassador Ocran, who said these at Cape Coast during a presentation of eight thousand nine hundred and twenty eight (8,928) pieces of laptops by the government to three hundred and seventy two (372) basic schools in the Central Region, also advised pupils to make the proper use of the computers for their juniors to also come and use them.

He noted that Information and Communication Technology (ICT ) is an examinable subject, but most students in the rural areas have not set their eyes on a computer before , and even those who have seen one are always ignorant about its functions and, therefore, cannot operate  it in order to prepare very well for it during examination.

Ambassador Ocran noted that the government under the late Prof. John Evans Atta Mills realized that most candidates were failing the ICT exams and that there should be an immediate approach to mitigate the anomalies.

He said Prof. Mills and Mrs Betty Mould Iddrisu,  the then Minister of education, agreed on a decision to supply 60,000 laptops to basic schools throughout the country, and so far 40,000 has been distributed across eight regions, but Central and Ashanti regions are now following suite.

Ambassador Ocran also assured that agreement has been signed with some three companies and as soon certain financial dealings go through, over 50,000 basic school teachers in Ghana would soon be provided with laptop computers.

He said the technological arena is moving on fast pace and that soon the government would replace the blackboards in the classrooms with electronic projectors, adding that the curriculum in the Senior High Schools would also be digitized to help students access information on a subject from a different schools.

Ambassador Ocran warned that on no condition should any of the laptops presented be given out or taken home, adding that the computers are for the school and not for individuals and, therefore, all the students must get access to them to aid their studies.

For her part, the outgoing Central Regional Minister, Mrs. Ama Benyiwa-Doe said the laptops presented to the pupils in the region were a testimony for government's commitment of providing quality education for the central region.

She noted that the presentation of laptops to the pupils at this tender age would help develop them in other to move along with the advancing technological world and also help them to solve basic environmental problems.

Mrs. Benyiwa-Doe described the failure of pupils in ICT subject in public basic schools as very alarming and attributed it to the fact that most pupils write the exams without any basic knowledge about computers while others have not even seen one before.

She, therefore, thanked the government for its support for improving the standard of education in the region and advised the pupils to prove their worth to the government in the coming Basic Education Certificate Examination (BECE) to attract more support.