We Will Spend Within Budget -Seth Terkper 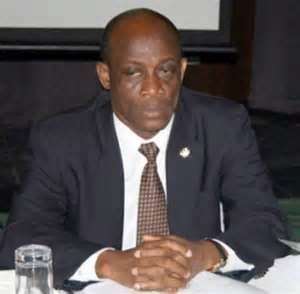 Yesterday's grueling match between the Black Stars and their Malian counterparts, which ended 1-0 in favour of the Stars, took the steam out of the much publicized vetting of ministers-designate appointed by President John Mahama to serve in his government.

That notwithstanding, the Minister-designate for the Ministry of Finance, Seth Terkper,  walked majestically to the Speaker's conference room in Parliament and told members that under his leadership, the ministry would respect appropriation and ensure fiscal discipline in the management of the economy.

To achieve this, he told the committee, which was without members from the minority side of the House, that his outfit would implement an accrual basis system of management, in which all Ministries, Departments and Agencies would be brought under one umbrella for effective monitoring to ensure that they do not overspend within their budget allocations.

'What has happened in the past, even the weekly records that we have and this basis of accounting, we do not have an effective system for monitoring contracts for goods and services which ministries, departments and agencies would have incurred and, therefore, most of the time the provision that is made to clear those arrears are not sufficient.

Because of the lack of systems also, we found a situation where we have the paybacks in the award of contracts outside what is provided for in the budget. In consonance with our dream to consolidate our middle income status, we are learning from the experiences of emerging

countries to move this basis of accounting away from the cash-driven system to what we call the accrual basis, whereby any outstanding liability at the end of the year would not be assumed to be paid out of the general fund,' noted Mr. Terkper.

'This is one way of ensuring financial discipline so that the ministries, departments and agencies will know that in the event that they overspend and they have contract and goods and services, it will be the first call on their resources,' he argued.

To complement the above-mentioned process, which Mr. Terkper noted has already begun, is the introduction of an account payable module which will track the liabilities for each contractor to enable the ministry 'keep track of the records of each contractor and the arrears that are attributable to the ministries.'

Answering questions to concerns raised by The Chronicle and a section of the public with regard to the management of the pension fund under tier 2 of the National Pension Act, 2008, Act 766, Mr. Terkper said the matter had been referred to the Attorney-General for advice by his former boss, Dr. Kwabena Duffuor.

'Mr. Chairman, it is the implementation of the 2 tier that has raised questions. The Caretaker Minister of Finance, Dr. Kwabena Duffuor has referred the matter to the Attorney-General for advice,' noted Mr. Seth Terkper, Minister-designate for the Ministry of Finance.

Last week, The Chronicle broke the story of an illegal setting up of another 'Social Security and National Insurance Trust (SSNIT)' to manage pension funds for government workers.

Such an action, which was suspected to be on the blind side of President Mahama, angered government workers, including the Civil and Local Government Staff Associations, Ghana (CLOGSAG) and the National Association of Graduate Teachers, who vowed to have the decision of the ministry reversed through the due process of the law.

But Mr. Terkper, in response to the issue said Dr. Kwabena Duffuor acted in very good faith in appointing Pension Alliance Trust, one of the Corporate Trustees licensed by the NPRA, to manage the 2 tier fund on behalf of all government workers.

Cost of borrowing
Touching on the issue of cost of borrowing, the former deputy Minister of Finance said the concern about debt for any country goes beyond the cost of the facility and that people should be more interested on how the country sustains its debt.

He said the direction on cost of borrowing at the moment is to keep the country within debt sustainable limits since the country prefers to lend on concessional basis which has a very low interest and long term payment.

But in moving forward as a country, he said when given the nod he will introduce a coding system account for every single transaction for all the government institutions and agencies which would be duplicated in all the Metropolitan, Municipal and District Assemblies.

Judgment Debt
Asked what he would do to minimize judgment debt, the former IMF Senior Economist said since the matter is being handled by a commission, his outfit would wait patiently for its report and act according to its recommendations. Notwithstanding that, he said his outfit would also continue to enhance its auditing processes so that the issue of judgment debt does not bother the Ghanaian tax payer.

He told the committee that the biggest threat to the country is the issue of cancellation of contracts; a situation he noted would be done away with if the right mechanisms are put in place to address such.

CBD LOAN
On the status of the Chinese Development Bank loan contracted by the Government of Ghana, Mr. Terkper said the country had received the first disbursement of such a facility and had put in an application for second tranche of the loan.

Delaying To Release Seed Funds For Purchase Of Cocoa Unprece...
44 minutes ago

Buhari Must Show Willingness To Dialogue With Protestors – A...
44 minutes ago