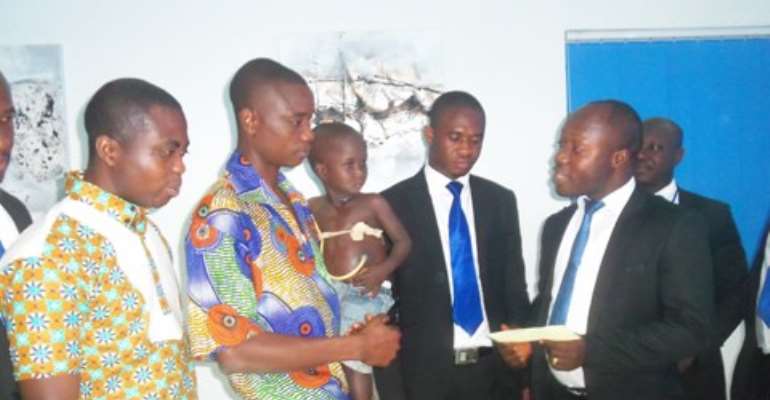 Mr. Owusu-Afriyie presenting the cheque to father of the victim, Razak Anaba.

Treatment for a 3-year old boy, who until now was being fed through the anus by his parents, has been given a boost with cash donation from Noble Dream Microfinance in Kumasi.

Management of the financial institution has donated Ghc4, 000 to support what doctors say is an intensive surgery, needed to restore damaged oesophagus.

Little Yakubu Razak has, for one year, lost the power to eat through the mouth because of acute sore- throat, after he accidentally drunk soda, a hazardous substance which contains alkaline.

Doctors at the Komfo Anokye Teaching Hospital say the last option to save the life of the boy is surgery, which will need the services of four doctors working on him concurrently.

Yakubu, while returning after following his eldest brother to school passed by a nearby house in the vicinity at Nyamebekyere near Asankragua in the Western region, drunk the substance.

Upon a neighbor's advice, his parents continuously fed him through the anus by administering liquid food with the help of enema syringe, known locally as “bentoa”.

Though doctors describe that act as crude, his father, Razak Anaba justified it, insisting it was the only option at the time.

Doctors have now created a passage in the rib region of the upper part of the boy's body for that purpose.

Chief Executive Officer of Noble Microfinance Services, Ezekiel Owusu-Afriyie says he was touched by the poor boy's story and the fact that there was no help in sight for him.

Dr. Nimako is worried many a time, such victims are given concoctions or oil to force them vomit substances like alkaline and acid, and in-turn, cause more damage to them.

About 25 of such cases were reported at the Komfo Anokye Hospital last year alone.

Dr. Nimako is worried parents continue to be apathetic to the safety of their children despite constant education, insisting they must adopt preventive measures to avoid them, especially at home.

Mr. Owusu-Afriyie presenting the cheque to father of the victim, Razak Anaba

KMA wants NHIS capitation reviewed
The Kumasi Metropolitan Health Directorate is calling for a stakeholders' forum on the way forward, for capitation under the National Health Insurance Scheme.

Metropolitan Director of Health Dr. Akwasi Yeboah Awudzi says the time has come for a review of capitation introduced a year ago, on pilot basis in the Ashanti Region.

According to him such a forum will address the grave financial challenges health institutions have been grappling with, since the introduction of capitation.

One year after its piloting began in the Ashanti Region, the capitation scheme under the NHIS still remains a contentious issue.

Most private health facilities remain out of the scheme and the few ones that are on board, charge fees for services hitherto covered by the NHIS.

Some government facilities have also been forced to run co-payment along with the scheme to avoid going bankrupt.

Another disturbing issue is the failure of the National Health Insurance Authority to reimburse service providers in time.

According to him it has not been possible to follow government's directive to health facilities to rely on internally generated funds because the funds supposed to come from the NHIS are not forthcoming.

Dr Awudzi was speaking at the Annual Performance review of the Kumasi Metropolitan Health Directorate.

He regretted government failed to advance funds to health facilities in the sub metropolitan areas for the whole of last year.