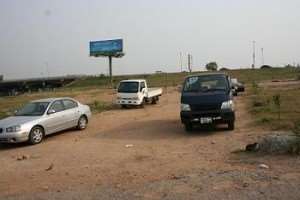 Before the commencement of the George Walker Bush Junior motorway, formerly known as the 'motorway extension', various forms of trading activities took place along the road.

However, in less than a year since the inauguration of the newly constructed highway by the late President J. E Atta Mills, some car dealers are gradually returning back to the area.

The Accra file tour to Achimota, noted that especially around the arc area, reserved for lawns, flowers and other trees for beautification, have been encroached by these car dealers.

The file has observed that some heavy duty vehicles also park on the lawns to rest from their long journeys.

The Accra Metropolitan Assembly (AMA) must put in all efforts to stop any form of business activity from operating in areas meant for city beautification.