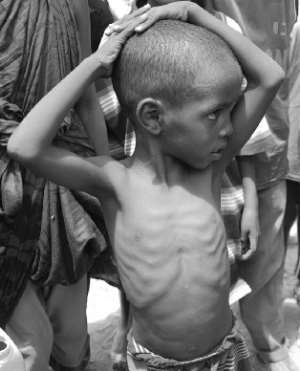 Hunger and malnutrition in childhood will trap almost a billion young people in poverty by 2025, according to a major new campaign, launched today by Britain's leading development charities and faith groups.'Enough Food for Everyone IF' is the largest coalition of its kind in the UK since Make Poverty History in 2005.

The Group's remit is also to build bridges between INGOs and Diaspora organisations beyond the Campaign. The Diaspora Working Group works closely with BME press to make sure that the voice of the Diaspora is heard.

The Coalition includes two organisations founded and led by Zambian women. One is POSITIVE RUNWAY: Global Catwalk to Stop the Spread founded by African Woman of the Year, Justina Mutale and the other is the Zambia Diaspora Development Network (ZDDN) founded by Chibwe Masabo Henry.

The group warns that in a world where there is enough food for everyone, the scandal of children growing up hungry also imposes a grave economic burden on the developing world, costing £78 billion over the next 15 years.

“IF the world can have a fair, just and equitable distribution system of food and wealth, our dream of a world free of hunger will become a reality” says Justina Mutale, Founder & CEO of POSITIVE RUNWAY, who is also one of the Diaspora Spokespersons for the Campaign and a member of the Coalition's Diaspora Working Group tasked with public engagement and BME media.

In its first report out today the group, which numbers 100 organisations and has the backing of philanthropist Bill Gates and Desmond Tutu, warns of the human and economic cost of hunger in a world where there is enough food to feed everyone.

“...Enough Food for Everyone IF the injustice and inequality being practiced in the less-developed world comes to an end”, says Chibwe Masabo Henry, CEO of ZDDN, who is also a member of the Diaspora Working Group tasked with public engagement.

As well as the 937 million children and young people (aged 15-40) whose life chances will be permanently damaged by the impact of childhood hunger by 2025, the report estimates that malnutrition will be costing developing countries an annual $125 billion (£78 billion) in lost economic output by 2030.

Great strides have been made in reducing poverty and 14,000 fewer children are dying each day than in 1990. But hunger is threatening to reverse these achievements. Hardworking poor farmers, especially women and their children, vulnerable and ordinary people everywhere face the highest food prices in a generation. In the UK, the numbers of people needing to use food banks has risen sharply. Climate change is making things even worse.

The campaign, which will be formally launched on January 23 at Somerset House, London and across all nations of the UK, calls on Prime Minister David Cameron to use the UK's G8 presidency in 2013 to take action on the root causes of the hunger crisis in the poorest countries.

The 'IF' movement challenges the Prime Minister to tackle 4 big IFs to help there be enough food for everyone: IF we stop poor farmers being forced off their land, and use the available agricultural land to grow food for people, not biofuels for cars.

IF governments keep their promises on aid, invest to stop children dying from malnutrition and help the poorest people feed themselves through investment in small farmers.

If governments close loopholes to stop big companies dodging tax in poor countries, so that millions of people can free themselves from hunger.

IF we force governments and investors to be honest and open about the deals they make in the poorest countries that stop people getting enough food.

Taking action on the 'corporation tax gap' by multinational companies alone would enable developing countries to raise enough revenue every day to save the lives of 230 children under 5 currently dying because of malnutrition.

Desmond Tutu supports Enough Food for Everyone IF and said:

“Hunger is not an incurable disease or an unavoidable tragedy. We can make sure no child goes to bed hungry. We can stop mothers from starving themselves to feed their families. We can save lives. We can do all of this, IF we are prepared to do something about it.

IF we challenge our leaders to take action. IF they listen to us. It's time the world's decision-makers came to the right decision on hunger. It's time to end the unnecessary suffering caused by the failure of the current food system. We can make hunger a thing of the past IF we act now.”

“We need to solve the underlying issues of famine and hunger once and for all. People are denied access to land that could produce food. Parents work tirelessly, but still can't afford to feed their children. It's unfair, it's unjust and the truth is – it's totally preventable. With enough people behind this campaign, we can make world leaders listen.

2013 can be the year we change the future by making this the beginning of the end of world hunger. It takes people coming together on a large scale demanding change to make this happen. IF you believe that everyone can and should have enough food to live, please join us.”

Ben Jackson, Chief Executive of BOND, said:
“We should be proud of the great strides we are taking as a world to reduce poverty and tackle infectious diseases, but it is still the reality that more people die each year from hunger than from AIDS, Malaria and TB combined. In a world where there is enough food for everyone, this is nothing short of a scandal.

We need a concerted effort from governments, civil society and philanthropists to tackle the root causes of this problem and together build a world where no child has to go hungry.”

The London launch event in the courtyard at Somerset House will begin at 6pm and will be attended by more than 1,000 campaign supporters, including actors Bill Nighy, Keeley Hawes and Bonnie Wright, musician Baaba Maal, athletes Denise Lewis and Colin Jackson and England rugby legend Matt Dawson.

It features the world's first Twitter-powered 3-D interactive animation. The show will feature a projection which is mapped to the building of Somerset House, bringing its architecture to life in 3-D, telling the story behind the campaign: that there is enough food for everyone but not everyone gets enough food. For the first time ever, a mapped projection will incorporate live tweets from the audience. Once the Twitter target is reached, the animation will reveal the four big IFs which comprise the campaign's demands to the G8.

Enough Food for Everyone IF events will be taking place across the UK's four nations: in Glasgow, Scotland; in Cardiff, Wales and in Belfast, Northern Ireland, as well as regionally across more than 20 key towns and cities.

In the 12 minutes it will take to show the animation: 52 children around the world will die from malnutrition; £2.3 million in tax will be dodged by multinational companies operating in the world's poorest countries.

The UK will have burnt enough food crops in our cars as biofuels to feed almost 90,000 people for a day. Land 25 times the size of the Olympic stadium will be grabbed by multinational companies and foreign governments.

IF enough people join us in showing support for ending hunger, world leaders will be forced to act. Join us at www.enoughfoodif.org