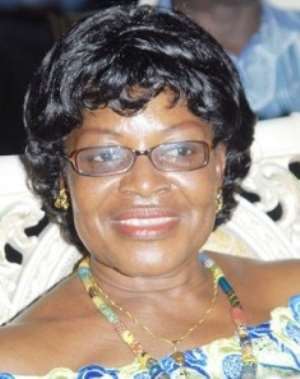 President John Dramani Mahama has dropped his fourth batch of ministerial appointments, confirming six regional ministers and assigning specific portfolios to the six ministers of state at the Office of the President.

Ama Benyiwa Doe has been dropped as Central Regional Minister.

The new appointments which were released from the Office of the President on Tuesday evening saw Nii Laryea Afotey Agbo being retained as the Greater Accra Regional Minister, while Bede Ziedeng heads to the Upper West Region as its Regional Minister.

Mr. Ziedeng  was the General Secretary of the breakaway Democratic Freedom Party (DFP) that recently merged with the ruling National Democratic Congress (NDC) after a caustic brawl led him and his party founder, Dr. Obed Asamoah to flee the NDC.

Mr. E.K.T Addo would be taking over from the vociferous Ama Benyiwa Doe who is believed to be a strong ally of late President John Evans Atta Mills.

Before this announcement, there were speculations that the controversial Director of Operations at the Presidency during ex-President Mills' regime, Nii Lante Vanderpuye was slated for the Greater Accra Regional Minister slot. Apparently that did not materialize.

Interestingly, the new Ashanti Regional Minister, Samuel Sarpong's appointment is an elevation because prior to his appointment, he was the mayor of Kumasi.

Luckily for Paul Evans Aidoo, his new appointment is a mere formality because he has been retained at his post, being the incumbent regional minister.

Despite this new announcement there would still be four outstanding regions whose ministers are still unknown. These are the Northern Region, the Upper West Region, the Eastern Region and the Volta Region.

Rashid Pelpuo, who was the former Deputy Majority Leader, has traded places with Mrs. Ofosu-Agyare who was previously named as a Minister of State at the Presidency.

President Mahama's decision to withdraw the nomination of Rashid Pelpuo from the Tourism Ministry might have been necessitated by serious agitations by party supporters who mounted a spirited protest based on the assumption that the President's nominations are tilted towards a certain direction.

Furthermore, Rashid Pelpuo has been cited to have a hand in the bloody chieftaincy dispute that has rocked Wa in the Upper West Region where two powerful factions are contesting the throne of the Wa Paramouncy. A couple of people have died in the clashes involving the feuding factions.

Now Rashid Pelpuo has been moved to the Presidency as the Minister of State in Charge of Public/Private Partnerships.

New Portfolios
On Sunday January 20, when the third list of Presidential appointees was released, it showed a tall list of Ministers of State at the Presidency with no specific portfolios.

The government received intense backlash on the size of Ministers of State at the Presidency and the fact that there was no indication of their portfolios in the statement released by the Executive Secretary at the Presidency Dr. Raymond Atuguba on Sunday.

Hence in the new statement from the Presidency, new portfolios have been ascribed to each of the Ministers of State.

Instructively, the Minister of State at the Presidency, Alhassan Azong has been put in charge of Public Sector Reform, while his colleague Alhaji Mustapha Ahmed is in charge of Development Authorities in the Office of the President.

Meanwhile, former Deputy Finance Minister who was whisked away from the Finance Ministry to become a Minister of State has been placed in charge of Financial and Allied Institutions in the Office of the President.

Alhaji Limuna Mohammed Muniru has been placed in charge of the interesting portfolio of Human Resource Development and Scholarships.

Finally, Comfort Doyoe Cudjoe Ghansah, the only female Minister of State, has been assigned to handle Social and Allied Institutions in the Office of the President.

It is unclear how these Ministers of State will synchronize their activities with sector ministers already charged with these responsibilities.

You're A Covenant Keeping Leader — Ahafo Chiefs To Akufo-Add...
9 minutes ago