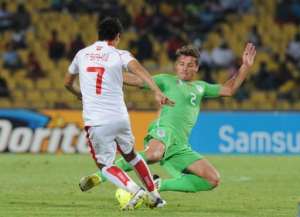 RUSTENBURG, South Africa (AFP) - Youssef Msakni struck in the final minute to hand Tunisia a 1-0 win over Algeria in a scrappy Maghreb derby here on Monday.

Msakni, a recent signing for Qatar club Lakhouya, lived up to his nickname of the 'Little Mozart' with a superb strike to settle a game that had otherwise failed miserably to justify its billing as one of the headline ties of the opening round.

The North African neighbours, both former champions, were meeting for the first time in the 56-year Africa Cup of Nations.

And Maghreb upped sticks for the night to the other end of the continent, well at least 1,000 Algerian and several hundred Tunisian fans who made the long trip south.

Despite the 42,000-capacity Royal Bafokeng stadium being only a quarter full, the atmosphere was charged.

Tunisia suffered an early blow when Kuwait-based striker Issam Jemaa had to come off with a left thigh injury after earlier clashing with Essaid Belkalem. Hamdi Harbaoui took his place.

Tunisia caught Algeria hopping on a counter-attack near the interval, French Ligue 1 striker Saber Khalifa racing into the box only to see his rising shot blasting off Rais Mbolhi's outstretched palms.

The half-time entertainment, four girls and the competition's fluffy mascot dancing, was more attention-grabbing than the turgid 45 minutes dished up on the pitch.

Tunisia coach Sami Trabelsi made one switch of personnel at the break, bringing on midfielder Oussama Darragi for Mejdi Traoui.

Northern Irish band D Ream had a huge hit with 'Things Can Only Get Better' in the 1990s, but as far as this game was concerned they got worse, until a cracking shot from Algeria's Nottingham Forest midfielder Adlane Guedioura flew just too high.

At the other end, Harbaoui was narrowly off target with a close-range effort.

The game badly needed a goal, and it duly came with Msakni curling a peach of a shot in from the outside of the box, the ball thudding into the top corner of the stunned Mbolhi's net.