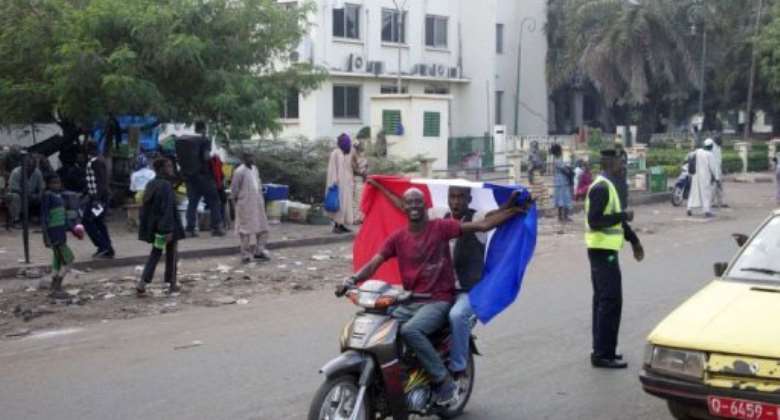 Malian people wave a French national flag on a scooter on January 12, 2013 in Bamako. By Habibou Kouyate (AFP)

BAMAKO (AFP) - A group of men sit in the shade in the Malian capital, sipping tea and praising France for a move that -- however complicated relations with the former colonial power -- may have spared the city from an Islamist onslaught.

"The French have really saved us!" says Moussa Toure, after France launched air strikes in support of Malian ground forces that helped reclaim the key central town of Konna from the Islamist groups occupying northern Mali.

"The Islamists would have quickly headed for us if France had not intervened."

The other thirty-somethings sitting with him in the capital's Ntomikorobougou neighbourhood say they share his gratitude.

"I sincerely want to thank France for this welcome initiative," says Alio Daou.

France, he says, stepped in "at a crucial moment" in the 10-month conflict, which has seen armed groups with ties to Al-Qaeda in the Islamic Maghreb (AQIM) take control of Mali's vast desert north and threaten to advance on the capital.

The groups have ravaged their way through the main towns, imposing strict Islamic law -- brutally punishing alleged transgressors with amputation or even execution.

In recent weeks the Islamists have descended from their northern strongholds towards the government-controlled south.

On Friday though, with the help of the French air force, Malian soldiers unleashed an offensive that allowed them to recapture front-line town Konna after one of the bloodiest clashes of the conflict.

In Bamako, French flags could occasionally be seen rippling in the wind from passing vehicles on Saturday.

Some Malians, especially the military, had voiced strong opposition to any foreign intervention to reclaim the north.

And not everyone in Bamako was singing France's praises after "Operation Serval".

One man who did not want to give his name blamed the strife in Mali on regional destabilisation brought about by the Western-backed overthrow of Libyan dictator Moamer Kadhafi in 2011.

Ethnic Tuaregs from Mali who had travelled to Libya to fight alongside Kadhafi's forces returned after his slaying with beefed-up arms supplies, and proceeded to relaunch a rebellion for an independent homeland.

That rebellion was then co-opted by Al-Qaeda-linked Islamist groups, leading to the current crisis.

"The West got us into this mess," said the Bamako man.

"It is not just France that needs to clean things up -- the US and NATO need to come in and get their hands dirty too," agreed one indignant web user.

On Saturday evening a relative calm had returned to the capital, though a state of emergency remained in place and police patrolled discreetly.

What counts now, said restaurant owner Aissata Cisse, is that Malians back their army.

"All Malians need to lose their egos and encourage our soldiers to free the north," she said.