By Albert A. Arhin 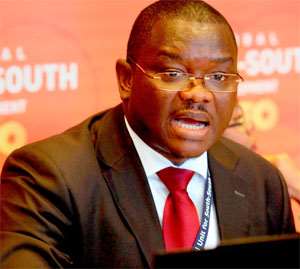 That Ghana's National Health Insurance (NHIS) is a novelty cannot be discarded. That the NHIS was designed to protect the poor and reduce out-of-pocket payments is also a fact. There is also no denying the fact that the NHIS has been able to facilitate access to equitable healthcare services for a section of the citizenry.

Of course, there are nearly 60% of the population who are still uninsured—implying they are still living the 'cash and carry system' after almost a decade of implementation (according to the 2010 Annual Report of the Ministry of Health). Whether the NHIS is delivering its mission and has indeed been pro-poor as designed or not is not actually the focus of this piece of writing.

Indeed, the NHIS is being confronted with a number of challenges of which the NHIA is in position to address them. One of these challenges relate to the financial sustainability of the scheme. In view of the political cloud surrounding the whole NHIS episode and the recent 'achievements games' being played by the leading political parties, the NHIA has been very charitable with the truth relating to the financial sustainability of the scheme. What is then the truth? It is that the NHIS faces serious financial crisis which may threaten the gains already made by the scheme in promoting affordable care for the populace.

Available records from NHIAs own 2010 Annual Report shows that the NHIS incurred a deficit of GHC 19. 5m in 2009 and (the deficit) got more than doubled to GHC 47.3 m at the beginning of 2011. In that said report, the NHIA rightly acknowledges that “financial sustainability of the scheme remains a big challenge…it is projected that without any additional sources of funding to the current sources, the NHIF risks of dipping down by the close of year 2012” (page 32).

In this piece of writing, my sole intention is to shed lights and re-echo some propositions which the NHIA and the government can consider to raise additional financial resources to save the NHIS from 'dripping down'.

To begin with, it is worthy to mention that the main sources of finance for the NHIS are: (a) the National Health Insurance Levy (NHIL), (b) tax from Social Security National Insurance Trust (SSNIT), at 2.5 percentage points, covering largely the SSNIT contributors (c) individual contributions/ premiums (paid directly to District Health Insurance Schemes), and (d) other funds from investment returns, Parliamentary and budgetary allocation, or donors. Over the years, the NHI levy has consistently been accounting for around 70% of the total income for the scheme while the SSNIT contributions have been accounting for around 20% of NHIAs income.

Interestingly, the premium from the informal sector has not exceeded 5% of the total income of the NHIA over the years with the other sources of funds filling the remaining 5% gap. This trend shows that the premium cannot be relied upon if the NHIS is to deliver its mission.

This paper therefore joins the growing calls to consider increasing the NHIL by about 0.5-1.5% from its current 2.5% to a maximum of about 4%. This increment is important to enable the NHIA meet its ever increasing on claims, operations and administration. Will such proposition not compound the already perceived high cost of living? Not necessarily although it could in other sectors (e.g. hotel bills). Advantageously, Ghana's VAT system exempts large number of our common staples and consumables and so the effect will largely be skewed towards the rich rather than the poor.

Nevertheless, there should be enough public education to ensure that this proposition does not elicit resistance from the public. Business-as-usual is indeed NOT an option.

Secondly, this author proposes consideration of the so-called “sin taxes” as another avenue to consider raising new domestic resources without necessarily increasing the income tax rates and without much opposition from the citizenry and corporate bodies. These are taxes levied on products considered harmful to health. Examples are tobacco and alcohol.

A WHO report shows that by raising tobacco taxes by 50%, low-income countries like Ghana could together generate new funds for health to the tune of about $1.4 billion each year. The report further argues that raising taxes on alcohol or alcoholic beverages to 40% of the retail price could have an even bigger impact—with tax revenues potentially tripling in some countries. Even a 1% levy on other harmful products, such as sugary drinks, the booming 'fast food/fried rice' markets and other foods high in transfats would further raise substantial funds. The good thing about “sin taxes” is that they raise money while also protecting health. This is an important source we can look up to finance our novelty NHIS.

Thirdly, we could also look at the telecommunication sector. The National Communication Authority reported in September, 2011 that there were nearly 18 million active telecommunication subscribers in Ghana. If each subscriber is deducted at least GHC 3 spread throughout a year to finance the scheme, is it not GHC 54 million which is being generated?

We know that currently there is communication (talk) tax which is being used to finance the National Youth Employment Programme (NYEP), but its overall impact on call rates seem negligible to subscribers. Call rates is as low as GHC 0.03 (i.e. 3p) for some networks. I am not sure the proposed GHC 3 per year to finance such a worthy cause of the NHIS would generate resistance from the citizenry as well as the telecommunication operator.

It therefore constitutes an important source worth considering. But of course, a lot of public education and moral persuasion have to be employed to reduce much resistance.

Fourthly, wouldn't also be a worthy course if we focus on the financial sector to ensure that they make a fair contribution to society? Each year not less than GHC 100 million are bagged as net profit by the about 26 commercial banks of the country. With insurance and microfinance institutions combined, this figure just form a tip of the iceberg. Can we have a targeted tax specifically charged to the financial sector to support the NHIS?

Additionally, volume of trading for shares keeps increasing year by year—which demands some revenue generation attention. In 2009 alone, when the Ghana Stock Exchange indicated it was a difficult year due to the effect of the global financial crisis and the switch from paper to electronic certification, volume and value traded was 97million shares worth GH¢74.19million.

This value of GH¢74million was just about 20% of the value traded in 2008. A tiny tax of as little as 1 % applied to financial institutions and transactions (shares, bonds, currency and their derivatives) could raise tens or even hundreds of millions revenue to meet the cost to pursue the objectives of the NHIS.

Another possible source of funds worth considering in this regard is levying foreign exchange transactions. There is a significant foreign exchange market in Ghana, with daily turnover estimated to be approximately $38m (according to a paper authored by Dr. Duffour and others). This gives an annual figure of $13.680b. A currency transaction levy of just 1 % on this volume of trade could yield about US$ 136.8 million per year—and hence provide a substantial amount of money to finance the scheme.

While calling for increased sources of finance, the fifth recommendation is for the NHIA, the Ministry of Health and other stakeholders to implement a number of cost-savings measures from the inefficiencies, cost-escalation, corruption and abuses in the health sector—which could be used to support the course of the NHIS.

The September-December 2011 edition of the Ghana Health Insurance Review (a publication by the NHIA), rightly acknowledged these issues. In the 2011 Budget of the Government, it was reported that a nationwide clinical audit in 2010 for example helped realise nearly GHC8 million—which gives an indication of the fraud and abuses in the system.

The Independent Health Sector Review for 2009 for instance also found that the price of some major medicines is about 300% higher than international reference prices. Better policies and regulations for the purchasing, prescribing, and quality control of medicines could bring substantial savings.

In a research report jointly published by the ISODEC, the Alliance for Reproductive Health Rights and the Essential Services Platform with support from Oxfam, it was found that at least savings worth about 36% of total government health expenditure in 2008 could be made on the inefficiencies and cost escalation in the health system. The report estimated that if we pay attention to reducing the 'waste' in the health system, nearly GHC 374 million could be generated annually to support the financing of the National Health Insurance Scheme.

For this paper, business-as-usual is never an option as our inaction can cripple the functioning of the NHIS. As citizens join hand to seek solutions to the financial sustainability of the NHIS, nothing is expected in return other than quality and affordable healthcare. Indeed, to the extent that about 60% of the population is still uninsured, it is important for the NHIA to implement strategies that will see many of the populace get enrolled—and if possible finance the contribution of the poor in the informal sector entirely from these proposed taxes.

This will see the country truly progressing towards universal health coverage—where everyone including the poor and the rich, men and women will have affordable and equitable access to healthcare at the point of needs.

*The writer is a PHD student at the University of Cambridge, United Kingdom*

Our Biggest Issue Is Jobs - Akufo-Addo
27 minutes ago

Thank You For Backing My Innocence’ – ACP Agordzo
27 minutes ago