The Implications of Overvotes 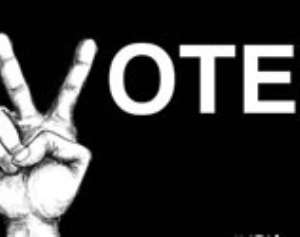 Under our electoral laws, the Presiding Officers, acting as agents of the Electoral Commissioner (EC), are mandated to complete Column C of the so-called Pink Sheets (Statement of Poll and Declaration of Results for the Office of President) at the END of the poll before counting commences.

Column C of the pink sheet is titled "Ballot Accounting" and it is an important in-built control mechanism for assuring the validity and fairness of the election outcomes. To achieve its control purpose, the Presiding Officer must fill Column C before counting commences. Otherwise, electoral shenanigans can be perpetrated and covered by simply working backwards from the counted results, thereby negating the control function.

There are 6 parts to Column C (C1 to C6) and each part requires a critical pre-counting data:

In C1, the officer is to record the total number of ballots issued to voters on the polling station register. Column C1 is the key control for detecting overvotes and undervotes. Most auditors will recognize that as a “control total.” If no overvotes and undervotes are present, then all the votes counted at the polling station (valid + rejected) should equal to this Control Total.

These are also tracked as part of the electoral controls.

Spoilt votes are not included in C1. Other parts of Column C are important but not essential to this conversation on overvotes.

When the control total (C1) is less than the counted votes, we have “overvotes.” When the control total is more than the counted votes, we have “undervotes.” Both situations are problematic and must be investigated promptly by the Presiding Officer. In any event, unless reconciliation is achieved, the EC should not include that polling outcome when collating results in the strong room. This is because overvotes and undervotes are prima facie wrong, irregular and problematic. They call for mandatory investigation. In my opinion, the EC acts recklessly, at a minimum, and puts the election outcome in serious jeopardy if he knowingly includes overvotes and undervotes in his collation.

Consider polling station code 262203 (with the unique serial number 0017717) shown by Dr. Bawumia in his presentation. To my knowledge, the contents of that have not been challenged or are in dispute.

The number in box C1 is 277. This is the Control Total − the number entered before any counting of votes (rejected or valid). It is the number of people who showed up to vote on voting day and were given ballot papers.

That means counted ballots was 291 compared to actual ballots issued of 277.

Strange? Yes. Very strange. Impossible. Irregularity. Irrational. Overvotes. This is the exact purpose of the controls built in the pink sheets. The Presiding Officer must reconcile this result before transmitting it to the collation centers and without reconciliation they must be returned to the Presiding Officer, as not ready or valid for collation!

According to Dr. Bawumia, this phenomenon was replicated throughout the country, resulting in 620,443 ballots cast by "people who did not show up to vote."

If this is, indeed, true, and there is no reason to doubt its validity, it is a cause for serious concern, at least, for any well meaning Ghanaian or anyone who has honour and believes in fairness, justice and truth.

This electoral malaise is not something that any well-meaning Ghanaian should celebrate. This is a national electoral tragedy that, in my opinion, certainly raises serious questions about the 2012 Presidential election outcome and probably will be a matter of grave concern for the Justices of the Supreme Court, into whose laps this disturbing evidence has been entrusted.

Our Laws and Courts have taken, as they should, a very serious view of electoral irregularities. While the statutes are better defined and the case law is clearer on parliamentary elections, it stands to reason that irregularities at the Presidential level will attract a similar, if not more heightened, level of scrutiny.

Under section 20(1) of the Representation of the People Law, 1992 (PNDCL 284), the election of a candidate shall be declared void on an election petition if the High Court is satisfied:

(a) that general bribery, general treating, general intimidation or other misconduct or circumstances, whether similar to those specified in the Law or not, have so extensively prevailed that they may reasonably be supposed to have affected the result of the election;

Overvotes of over 620,443 seems like the pervasive misconduct that this law had in mind. In my chats in the social media, a few people have noted that irregularities in elections are unavoidable and occur in every country. These comments are, of course, misplaced. What we have here is not just an irregularity but also a gargantuan potential outcome-altering irregularity. No democracy can be built or sustained on such a farce. No court will be willfully blind to such a falsehood.

Our high courts have also applied the scrutiny doctrine as another ground for the possible cancellation of election results. Here the high court directs the EC or other persons, authorized by the Court, to scrutinize the ballots. On a scrutiny order, votes that are illegally procured are rejected.

The court's standing on irregularities and application of the scrutiny doctrine is highlighted in Enos v Electoral Commission [1999-2000] 1 GLR 564 at 565 (holding that "even though the election itself had been conducted in accordance with the law, the court found that had the breaches by the returning officer of the Electoral Commission not occurred, the petitioner would have been declared the winner. The petitioner had therefore been caused incalculable harm by the breaches caused by the officer, which had substantially affected the results. Accordingly, in compliance with section 19(b) of PNDCL 284, the court declared the petitioner, and not the respondent, as duly elected. Furthermore, in compliance with section 22(1) of PNDCL 284, the court certified its decision to the Electoral Commission."

I reiterate my humble plea to everyone to calm down, resist the temptation to be emotional, treat the issues dispassionately, seek the truth, and to avoid confrontations, insults, invectives, innuendos and insinuations!

The issue before the Supreme Court is what is the true result of the 2012 Presidential elections. All of us will win by seeking and finding the truth. Falsehood will be the only casualty in this search for truth!