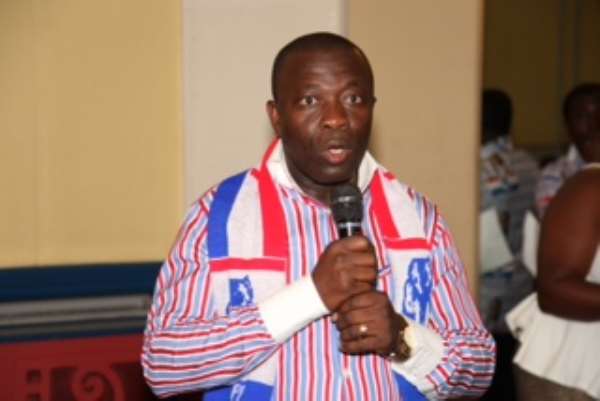 The political sense in Nana Akufo-Addo's declaration; "All-die-be-die" will be meaningless, unless it is used not only to unravel the mystery behind the consistent electoral fraud in the country, but also to enable the electorate have value for their votes.

As Ghanaians, we must not allow foreigners "imported" from neighbouring countries to determine the course of our political direction, through the infiltration in the electoral process that is meant for only Ghanaians. Ghana is for Ghanaians and not Togolese, Ivorians, or Burkinabes. This dignity must be respected and protected by our foreign brothers. It's wrong for Afari Gyan to create ghost polling stations for some 'wicked ghosts' to exercise their franchise.

We cannot live in a country where rules governing period elections are changed to favour one political party. If all political stakeholders had agreed to "No Verification, No Vote" clause, why should the EC intentionally break down verification machines to allow others to vote. Did the EC not test the machines before December 7, 2012?

In any case, why should John Mahama come out to state that the EC should allow any registered voter to vote irrespective of the malfunctioning of certain verification machines? Was John Mahama not interfering in a state institution? Was he allowing a state institution to work as Barack Obama admonished? And why did the government spend money on the new biometric voters' register, if voters could be allowed to vote without verification?

The posture of the Chairman of the Electoral Commission, Afari Gyan, prior to the elections leaves much to be desired. He has left many questions on "whys" and "hows" in the minds of many a Ghanaian. For instance, why should the general elections be held in two (2) days when all electoral posters displayed December 7 as the official voting day? In 2008, the people in Tain Constituency did not vote on December 7, but a special arrangement was made for them to vote on another convenient date. Why couldn't the EC take a similar action? Ghanaians are still baffled as to the time of the voting day that the EC realised the breakdown of those verification machines. Where were the replacements and how did the EC manage to fix the broken machines the next morning?

Why should over 60% of faxed presidential results have Accra telephone code? Why should Israelites and Chinese IT experts be contracted by the EC to change and massage figures to suit John Mahama? Why should 96 votes turn 996 votes and 10,500 end up 15,000 for John Mahama? Why should the EC Chairman be changing electoral figures on the EC's website? He announced on the television that 79.48% of the electorate voted but this figure has now changed to 80.15%. How and why, Afari Gyan?

Folks, the fraud is overwhelming and this must never be swept under the carpet. With other concrete evidence captured on video and which cannot be revealed on this forum, there is no way victory will elude your beloved party, my beloved party, and our beloved party.

The era of " fama Nyame" is gone. The NPP and majority of Ghanaians will not accept any injustice because they see it as a threat to our democracy. Ghana is seen as the beacon of African democracy and we must continue to set the pace for the rest to follow. Our motto; "Freedom and Justice" was chosen at the expense of peace because our forefathers knew that once there justice, there is always peace.

Lauren Gbago was declared a president-elect in La Cote D'Ivoire a year ago, but today Alhassan Quatarra is the president. Blood was shed before this was made possible. But fortunately, ours is different because it is the NPP, the pacesetters of Ghana's democracy. We have moved from a stolen verdict to "fama Nyame". With only 23,000 votes to chalk first round victory as incumbent government, we ended up being sore losers with a margin of 40,000 votes. We handed over power peacefully, in spite of the clear evidence of voter intimidation, violence, and other electoral malpractices. "The NPP's allegation is bothered on criminality and since I am not a Police Officer, there is little I could do about it". That was the statement of Afari Gyan after the 2008 general elections. This time around we are heading to the Supreme Court with concrete evidence. Evidence that will push the Supreme Court (SC) to either declare the 2012 presidential election null and void or make Nana Akufo-Addo the president.

With the proper scrutiny of our case by the best legal brains in the country, we in the NPP are not expecting to hear anything different from the above because our Supreme Court judges have sworn to defend our democracy. Let's all pray for them so that they throw away any form of impartiality or political influence. Whether Ghana will remain stable or not depends on the decision that would be made by these 13 eminent judges.

I trust them because they have done it before. Over 13 high profile court cases have gone in favour of the NPP and today's one would not be an exception. I know that many people in the NDC would threaten to 'kill cats' after this judgement, but as to whether the several ways would be available for them to kill those cats, we all live to see the unfolding events in the coming weeks.

When a president-elect runs away to South Africa leaving his victory rally in limbo, it tells you how uncomfortable some people are in the country.

Let's have hope as party members because that is what the Black Star in the middle of the National Flag symbolises. The Battle is The Lord's. The Lord would not abandon His people, especially in this crucial time - a time that poverty has engulfed the entire nation; a time that corruption has taken centre stage of this particular government; a time when JHS graduates are thrown on the streets because they have no money to access secondary education. As religious people, we know all is not lost yet, for those who rely on The Lord, everything goes down well with them and they become the eventual winners. We are confident of victory because the truth is like the cork, no matter how hard you press it in the sea or water, it will definitely come out.

We as a party cannot accept this electoral fraud as defeat; our Presidential Candidate cannot concede defeat in the face of this blatant injustice. Accepting and conceding undeserving defeat for the sake of peace would be tantamount to perpetuating corruption, thievery, injustices, discrimination, tribalism, and human rights abuses in our body politic.

The NPP as a democratic party cannot be part of this evil. Our forebears have fought against colonialism and slave trade; our predecessors have fought against military dictatorship and abuse of individual freedom. We have fought for better electoral system to entrench proper democracy in Ghana. Under no circumstance would we allow these socio-economic and political gains to go waste because of Afari Gyan and John Mahama's misdeeds. We will continue to use our intellectual and natural wisdom as well as the passion for our beloved country to right the emerging wrongs. We are determined to make sure no blood would be shed in the pursuit of justice, regardless of the difficulties, for we know that vision coupled with persistency, always results in true success.