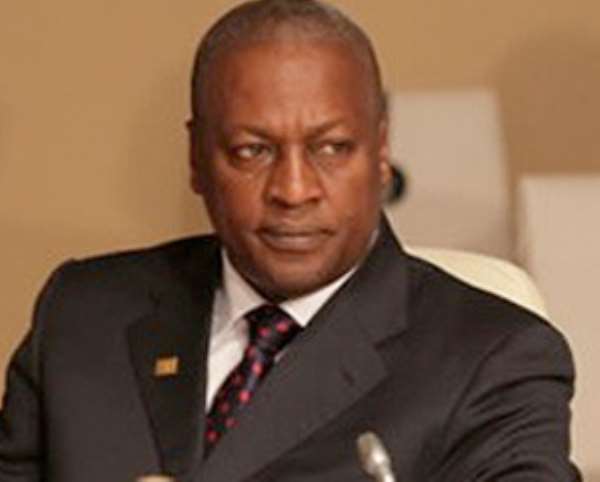 If the people cannot trust their government to do the job for which it exists- to protect them and to promote their common welfare- all else is lost.- Barack OBAMA.

Let me make it clear from the start that, I am not writing as a spokesman for the Ghana Prisons Service or any political organization. I am also not a politician. I am speaking on national affairs as a fundamental right guaranteed under our national constitution.

First, let me sincerely congratulate you on your election victory. Ghanaians voted for you for a number of reasons.

Since you were sworn into office as President following the demise of President Mills, you demonstrated statesmanship and your ability to govern and serve the people with due diligence and thoroughness. It therefore came as no surprise when you were overwhelmingly endorsed as the Presidential candidate of your party, the NDC.

Ghanaians voted for you because of the promises you made to them during the electioneering campaigns that if voted into power, the better Ghana agenda of your party will translate into prosperity and benefits for all. People also looked at the manifesto of the NDC and believed that the implementation of its content, its policies and programmes will bring relief to all especially the poor and down- trodden.

You were able to show by word and deed that you are a leader with a vision. Apart from the wranglings in your party, you were also criticized and vilified via the electronic and print media. These were enough to have made anyone lose focus. You maintained a cool demeanour and focused on achieving victory in an election that was keenly contested.

There are a number of issues that I wish to bring to your notice for possible consideration and implementation.

The first has to do with the formation of a government that must be put in place for managing the affairs of this country. The formation of a new government is a difficult job for every leader. The great George Washington put it more succinctly when he said: “To form a new government requires infinite care and unbounded attention; for if the foundation is badly laid; the superstructure must be bad.”

I wish to add my voice to one earlier made by the PNC leader, Hassan Ayariga, that an all inclusive government be given serious consideration by President elect, John Dramani Mahama. We should let the era of a winner takes all be a thing of the past.

There are people with useful skills and expertise outside your party who for one reason or the other did not join your party or any other party for that matter. Your Excellency may consider bringing such people on board for Ghanaians to benefit from their useful experience and expertise.

Appointments to public office should be based on competence and not on the altar of being a party financier or that the person is a party faithful. At the end of the day, your government will be judged by whether it has been able to serve Ghanaians well or not. That will come from the machinery through which you will administer the affairs of our nation.

Another area that deserves your attention is good governance. Good governance will eradicate poverty and promote development.

When I talk about good governance I mean a situation where the government uses the resources of a country to promote the welfare and general good of society.

This country returned to multiparty democracy in 1992. We have had successful elections in this country including the just ended Presidential and Parliamentary elections.

We need to consolidate the democratic gains we have made so far. The pillars of good governance include democracy, rule of law and respect for fundamental human rights and freedoms. No one should become a victim of any arbitrary decisions by a government led by you.

The judiciary should be truly free so as to inspire confidence. The media in Ghana is vibrant. It is there to promote good governance.

The Right To Information Act should be passed into law. This will enable the citizens to hold their leaders accountable for their actions or inactions.

Every government that has come and gone has not escaped the usual accusation of being corrupt. It is hoped you note the trend and be proactive.

There are institutions that exist to fight corruption. It is my candid opinion that you resource these institutions to make them operational, effective and efficient so that they are able to discharge their mandate successfully.

Poverty is still a disease in this country. It is an indication that our economic policies are not responding well to the situation. Our economic policy needs a paradigm shift. The private sector has been identified as the real engine of growth in every country.

People who have good business plans and have shown by word and deed to have business acumen should be supported by government to create their own jobs. Government should support such people with funds and other relevant inputs and logistics.

Another issue that should engage your attention is internal security. It is scary travelling by night in this country because of highway robberies that are perpetrated almost daily. There have even been instances when banks have been robbed in broad daylight. Insecurity is a disincentive to investors.

The security agencies will need more training and resources including the necessary logistical support to play their roles well.

Death through accident is astronomically high in this country. Accidents claim more lives than any one disease in this country. This is an issue that I think the government needs to tackle.

Education, electricity, water and health facilities should be made available to communities that do not have any at all. There is also the need to revitalize the existing ones to make them sustainable.

Foreigners seem to have hijacked the retail trade in this country. They also engage in illegal mining. They are flouting our laws with impunity. Governmental intervention is surely needed.

I hope you have taken note of the issues raised. Like your predecessor, you have hit the ground running.

Wishing you total success as President of the Republic of Ghana.