DIET OF HOMOSEXUAL FISH TO SAVE AFRICA? 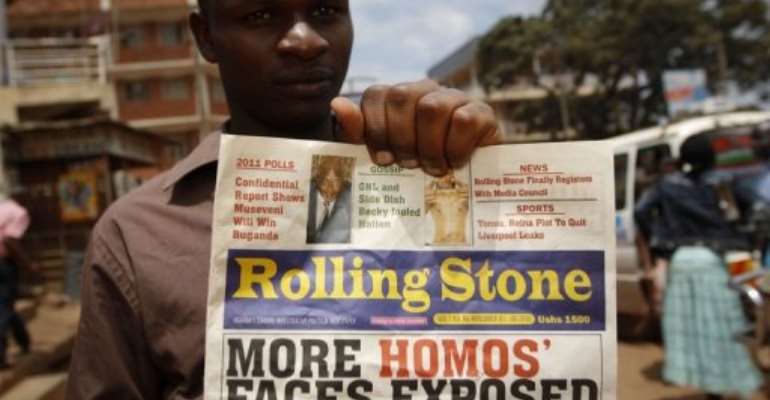 I saw two documentaries recently which disturbed and angered me tremendously.

“Call Me Kuchu” is about the fight for human rights for gays in Uganda, where homosexuality is still considered criminal, and gays are at constant risk of imprisonment, and even murder and execution. The introduction to “The End of The Line” starts, “Imagine an ocean without fish. Imagine your meals without seafood. Imagine the global consequences. This is the future if we do not stop, think and act.”

One of the most annoying things in Call Me Kuchu was the fervour with which many Ugandan Christian leaders condemn and persecute gays, devoting much of their sermonising to condemning them. One brave bishop was excommunicated from the Anglican Church of Uganda for standing up for the gay community and ministering to them. Even at the funeral of the murdered prominent gay rights activist DavidKato, his supporters were publicly condemned by the officiating pastors.

I found myself wondering if there weren't other issues that these men and women of God, and the politicians sponsoring the anti-homosexualitybill could consider more worthy of their time and attention? Like their government's involvement in the crisis inneighbouring Congo? Or bringing the Lord's ResistanceArmy to book? Like the greed and corruption rife among the elite? Or making sure that the poor in society are adequately fed?

The End Of the Line shows how European and Asian fishing trawlers patrol off African shores, literally sucking the oceans dry offish, impoverishing the continent's fishing communities, and further threatening her food security. It's not just an African problem either: the entire global eco-system and economy is at risk. Is this not a matter for the men of God? No – homosexuality is more important. Even the worldwide Anglican Communion is in danger of splitting up because African bishops have decided that they know God's Word even better than the whites who brought it to their ancestors (and found in it justification for enslaving them) and it clearly states that homosexuality is a sin, an abomination to be eradicated by all means - including murder, if necessary.

Let's turn to the Bible for two fishing parables. John 21: 1 - 9 describes how Jesus told his disciples, after a barren day of fishing in the Sea of Galilee, to cast their nets on the other side of the boat, and miraculously, their nets became so full that they were unable to haul them in. Another passage, Luke 5: 1 – 7 tells a similar story on the lake of Gennesaret, where another miracle caused the fishermen's boats to become “so full that they began to sink”.

What interests me about these two stories is the fact that even two thousand years ago, it was possible for man, to manually (and thanks to the odd Christian miracle) catch far more fish than they needed. The Bible doesn't say this, but I presume that the fishermen were wise enough to return many of the fish to the sea to reproduce and provide for future catches, while still leaving them with enough to take back home to eat, without “sinking the boat”.

Technology makes us operate so fast that we no longer appreciate nature – take time to “smell the roses”, or know when enough is enough. In fishing, the necessity to slow down is as urgent as in any other endeavour. I have a solution that should please the men of God while saving the planet. It's clear that overfishing must stop, but if super-trawlers cannot be bannedfrom Africa's waters as has happenedrecently in Australia (how communistic!) then teams of African clergy can go aboard these vessels and select which fish should be returned to the waters to reproduce. Even though the Bible doesn't reveal this information, it is known that there is much homosexualbehaviour in the animal kingdom. With their God-given ability to identify homosexuals, these people can select only gay fish for the dinner tables of Europe, returning the straight ones to the water to continue being fruitful and multiplying. We'll be surprised at how, with worldwide belt-tightening, gay fish can more than meet all our needs.

If this seems a bit too far-fetched for the holy brethren, I hope they would agree with this alternative: those oceans need to be policed and effectively patrolled, to stop the continued rape of Mother Africa. Such action helped bring an end to the slave trade, and this is arguably as important an issue for us today, if not more so. If Western or African governments won't act, then the people must. This needs leadership. True followers of Christ can provide such leadership, instead of persecuting homosexuals.

I heard another story which gave me probably the first sign for hope: the daughter of a relatively wealthy Nigerian arrived home for Christmas a week or so ago, to find to her horror that their swimming pool at home in Lagos had been converted into fish farm. Even the elite are now being affected! With any luck, this young lady will take time between attending expensive concerts and New Year parties to start a twitter and facebook revolution on her i-phone. No, her tablet: that has a nice biblical ring to it.

© Tayo Aluko, December 2012
Tayo Aluko is a Nigerian-born actor, singer and writer based in Liverpool.