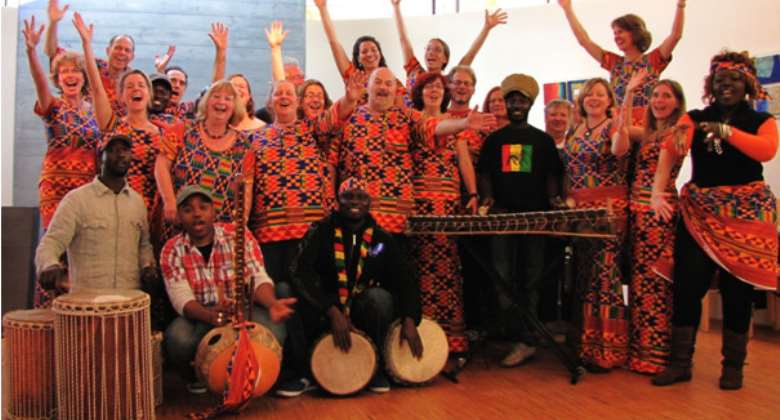 “AFRIKOR “ THE BEAUTIFUL VOICE FROM TUBINGEN

How great and beautiful it is to witness men and women of different race in a paradigm of multi-coloured unison giving praises and adoration, musically, to the Most High God. Afrikor, a gigantic Ensemble from South West Germany, captured the hearts of audience who participated in their programme quite recently at Tubingen and Stuttgart respectively.

“It was so amazing, emotional and fantastic and I think the multi colored “Kente” traditional costumes describe the magic and beauty of African cultural heritage.” Mrs Elvira Mörk commented after the concert in Stuttgart.

Afrikor began their three dimension Repertoire, with inventive choral comparations from different dialects of Africa, including hymns from Zimbabwe, South Africa, Tanzania, Kenya, Cameroon, Ghana Senegal etc. Among others were tunes from Haiti, Mazedonia and Ireland all being back by an enchanting vibration West African native instrumentals of the Griots. The Griot is a repository of oral tradition and they are mainly predominant among the Mande, Mandinka, Bambara, Wolof, Dangomba , Mossi and many different tribes in West African region. They are said to be customary and talented musicians chosen to protect their ancestral historical deeds, and as storytellers , are obliged to disseminate the information objectively both with facts and authentic performance. According to traditional demands the Griots are very respectful personalities and belong to the decision making bodies of the society.

Afrikor , a contigent of 25 men and women from different nationals mostly Germans was formed two years ago in Tübingen , South West of Baden Wurttimberg, Germany. According to Mrs Susanne Frische, the founder of the ensemble, members were selected after remarkable training process. Their chosen inventive gospel program conveys spiritual message from Africa and the rest of the World. “I think we have a strong conviction and enthusiasm when we are on stage with a clear impression to deliver our very best to the audience, and I think that is the vital adrenalin which drives our emotion on stage” …… Mr Kwabena Amfo the only Ghanaian member of the group told Radio Africa in his remarks after their performance at the Schwabian capital, Stuttgart .

Commenting on the inspiration that motivated her to form the group, Mrs Susanne Frische made emphasis on her first encounter to the African continent specifically, South Africa, affectionately called the Rainbow Nation. “ Not only the geographical features of the continent attracted me but also the inhabitants , their culture including their music, especially the soothing and groovy choral melodies brought me into ecstasy” . Mrs. Frische added that after her journey back from many African countries( including Ghana) she was privilege to get the Kokadi , the energetic West African traditional group on board serving in contrast to the soft and harmonious choral tunes of the Afrikor. The Kokadi group, comprises of four experienced Griot musicians namely, Bakary Köne, Djele Kouyate , Kandara Diebate and Papa Seck, respectively, are notable of commanding the Djembe, Kora and the Xylophone(Balofone) instruments from West Africa with much expertise.

Many , many thanks and appreciations goes to the numerous sponsors including Contigo-Tübingen, Cinema in Waldhorn, Cinema in Tübingen, Computer Workshop , Jaques-Tübingen, Overcross Traveling Agency, Living Interaction, Rilling and Partner as well as the Tatami Restaurant all in Tübingen for their unflinching support.

Undoubtedly, the organizational structures of the group is complex , hence to bring all the 25contigent on board as well the four Kokadi members, all residing in different cities in and around Germany is a serious challenge that can hinder the progress of Afrikor in the near future.

“In a subsequent move to put measures in place, the management of Afrikor is in consultation with experts so that the afformentioned problem could be solved”. Mrs Susanne Frische confirmed.

The combine performance of the heterogeneous AFRIKOR Choral Ensemble and KOKADI was a mind blowing stage extravagance, energetic, exotic and above all a demonstration of a combine richness of African and European diverse tradition and myths. It is no wonder that they have won recognition in South West metropolitan area in Baden Württimberg, and with pursuance and dedication, Afrikor and Kokadi will conquer international platform with flying colours in the coming years ahead.