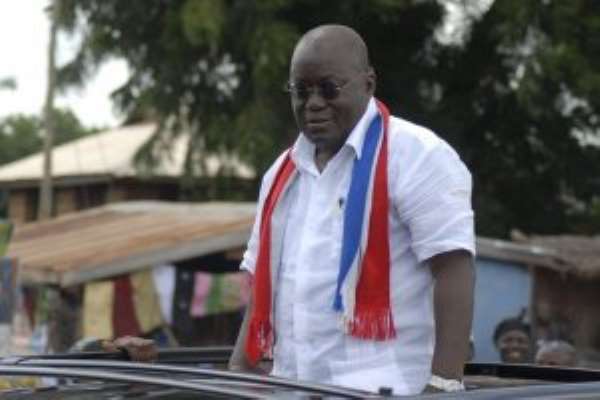 The New Patriotic Party (NPP) is currently assembling an astute group of legal brains, ably coordinated by the party's flagbearer, Nana Akufo-Addo, to fight its case of electoral fraud in the just-ended presidential and parliamentary elections at the Supreme Court.

The NPP has rejected the official results of the elections, as announced by the Electoral Commission (EC), and has officially given its intent to contest the results, which awarded the National Democratic Congress (NDC) candidate, John Dramanai Mahama, 50.70 per cent of valid votes cast, as against 47.7 for Nana Akufo-Addo.

The party's stance is against the background of what it terms gross “abnormalities” which characterized figures which placed President Mahama as winner of the polls.

Article 64 of the 1992 Constitution provides guidelines for contesting electoral results, and the NPP say it would leave no stone unturned to ensure that each and every citizen's vote counts in the just-ended elections.

Article 64 of the 1992 Constitution states: The validity of the election of the President may be challenged only by a citizen of Ghana who may present a petition for the purpose to the Supreme Court within twenty-one days after the declaration of the results of the election in respect of which the petition is presented.

(3) The Rules of Court Committee shall, by Constitutional Instrument, make rules of court for practice and procedure for petitions to the Supreme Court challenging the election of a President.

Nana Akomea, Communications Director for the NPP, was emphatic that the party would file its case at the Supreme Court within 21 days, as stipulated by the Constitution, and was optimistic the hearing of the case could start in full by January 15, 2013.

He hinted The Chronicle that the party had so far gathered “overwhelming evidence” of fraud, which the party would soon present before the Supreme Court.

He indicated that the party was determined to present “watertight” evidence at the court, adding that the party's auditing team had so far concluded work on 20,000 polling station results, “and the result are quite shocking,” he noted.

The President-elect is also due to be sworn in as President of the Republic on January 7, 2013, but Nana Akomea says none of these constitutional process currently ongoing would affect the validity of their case in court.

He referred to Article 64 (2) of the Constitution which provides that: “A declaration by the Supreme Court that the election of the President is not valid shall be without prejudice to anything done by the President before the declaration.”