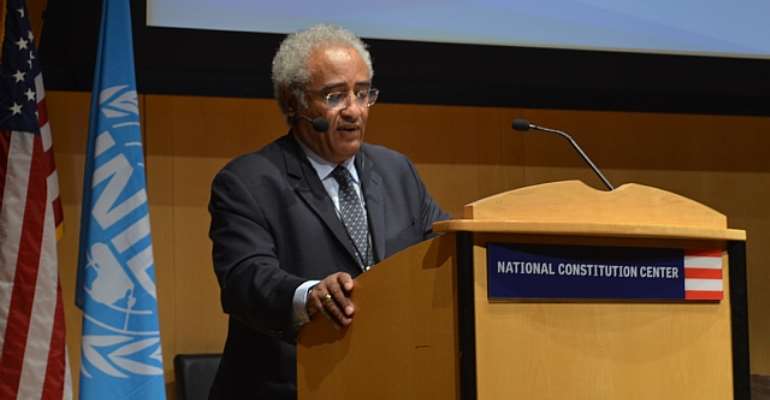 At a high–level conference held at Philadelphia's National Constitution Center, in the historic section of the “City of Brotherly Love,” international energy experts and key actors working on sustainable energy in the United States affirmed the importance of UN Secretary General Ban's Sustainable Energy for All initiative (SE4ALL).

Organized by the UN Industrial Development Organization (UNIDO) in collaboration with the Sustainable Energy Fund (SEF), the symposium brought together UN representatives, the US State Department, development partners, the private sector, academia, civil society and state and local government officials in an effort to find practical solutions to the “Challenges of Implementing Sustainable Energy for All at the Global and Local Levels.”

Mr. Ban's landmark initiative seeks to confront the problems associated with energy poverty by meeting three ambitious yet achievable objectives of supporting the “green energy” revolution to ensure universal access to modern energy, doubling the rate of improvement in energy efficiency and doubling the share of renewables all by 2030.

Noting that the “energy revolution” can in fact revitalize the global economy and help combat climate change, Mr. Ban has always reiterated his belief that “energy is the golden thread that connects economic growth, increases social equity and provides for an environment that allows the world to thrive.”

George Assaf, UN Industrial Development Organization (UNIDO) Director and Representative to the United Nations and other international organizations noted that the UN recognizes energy because “it is critical to the achievement of internationally agreed Millennium Development Goals (MDGs). Without energy, achieving inclusive growth and sustainable development, environmental protection, political stability and gender equity would be increasingly difficult.”

Energy experts confirmed that while the benefits associated with energy access are in great demand in developing nations especially those in sub-Saharan Africa and South Asia, it is also true that they richer nations like the United States should learn valuable lessons from the recent Hurricane Sandy.

“It is a matter of national security and global stability. It's at the heart of the global economy. It's also an issue of democracy and human rights” said Robert Ichord, Deputy Assistant Secretary of State of Bureau of Energy Resources as he referred the audience to Secretary Clinton's “Energy Diplomacy in the 21st Century” delivered at Georgetown University two weeks before Hurricane Sandy made landfall.

The after effects of Hurricane Sandy which left about 60 million people left in dark, with no access to electricity, is a reminder of the horrible lives that 1.3 billion people (men, women, children) around the world live each and every day including about 3 billion who rely on traditional energy sources such as wood, coal, charcoal or animal waste for cooking and heating purposes.

“This hurricane showed the vulnerability of humans to natural disaster even in the richest country in the world. It has also led to deep reflections on our preparedness against the effects of climate change in terms of adequacy of basic infrastructure, including transportation, water supply, and supporting urban planning. But the most striking that stood out in the midst of this tragedy was the critical importance of energy, and especially reliable energy supplies,” emphasized Dr. Assaf.