John Dramani Mahama's victory will be senseless if..... 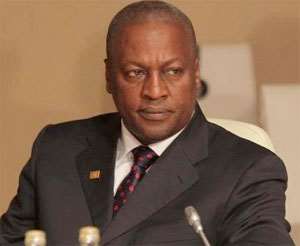 Whilst Ghanaians continue to celebrate a successful and peaceful election, the NDC government must be humbled by the reality that it owes its electoral victory to the sacrifices of ordinary, homeless, hungry, and jobless Ghanaians who stood long hours in the burning sunshine to cast their vote.

It is significant to note that ordinary poor Ghanaians stood with the NDC in its crucial moment of depression, especially when the party and government had its back against the wall, following the Woyome scandal, Konadu's resignation and the formation of her NDP, death of JEAM, no campaign/support from Former President Jerry John Rawlings, and having to use only three months to campaign for re-election.

As the saying goes, every good turn deserves the other. The least the NDC government can do is to also keep faith with our poor folks by:

1. Giving them a government of quality leadership, made of the best experienced professionals, with enormous understanding of the reality of the Ghanaian economic, social, health and educational crises and have solutions and timelines to address same.

It will be suicidal for the government to reward party loyalists who lack the experience and competence with political appointments, only to end up underperforming. This will not only affect our chances in the next election, it will also be seen as unethical and insensitivity to the plight of the ordinary Ghanaian.

2. Taking practical steps to implement the fantastic ideas in the NDC manifesto such as:

• making basic education completely free within the first four years of the government;

• building 10 new teacher training colleges;
• a university in the Eastern region;
• 200 new senior high schools;
• making sure that SHS education is free by 2016.
The others include:
• creating jobs through GHc10 million Youth Jobs and Enterprise Fund;

It is unacceptable to measure the maturity of Ghana's democracy, only by how peaceful the ordinary people cast their votes and accept the outcome. A mature democracy must also be measured by the commitment of political leaders to implement the flurry of ideas that procured their electoral victory.

I supported JDM to become President not only because I am a member of the NDC. However, it is my considered opinion that out of all the candidates who put themselves up for this election, JDM had the kind of leadership qualification, experience, personality traits, understanding of the Ghanaian situation and the practical solutions to move the country forward.

I supported him because I have no reason to doubt his claims of caring for Ghana's poor and determination to build a country and an economy where opportunities exist for all to succeed.

I voted for JDM because I believe he is the only person at this moment who can unite a beautiful country which unfortunately appears to be sharply divided along partisan lines.

These are the qualities I voted for ! And I know I speak for thousands of poor Ghanaians who equally voted for the NDC.

The wild celebrations of the NDC' victory by ordinary Ghanaians and hardworking NDC cadres is understandable. They have earned it. But the people of Ghana can only have true celebration and bliss if their vote for JDM translates into economic prosperity and development of our country.

If voting one-touch for JDM and the government of the NDC translate into economic salvation for our poor people, I have no doubt in my mind that the good people of Ghana will once again queue for several hours to renew the NDC' mandate in 2016 without any hesitation.

I wish the President God's wisdom, good health and strength to succeed.