We Have A Same New President! 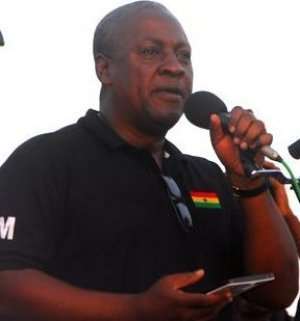 My prediction was entirely wrong. The exact opposite of what I thought would happen is what went down but I am not embarrassed to say that I was off point. Until 10 pm last night, we were not sure there would be a recount in some constituencies and whether or not we would be in a crisis.

But Dr. Afari Gyan came out to announce John Dramani Mahama as the new President elect and so we are there. Well done, Mr Mahama. And well done also, to the NPP party and Mr Akuffo Addo. It was a hard fought battle and the spoils of the fight went the other way.

It could have been his chance, but not this time. He might have another shot at it if he can handle the next four years as an opposition leader. The NPP will look at the drawing table and decide.

All in all the elections were conducted fairly. The NPP party has a beef with some of the numbers from some polling stations and if they can prove their case, there might be some changes. The NDC might not mind giving up a few seats in Parliament. At last count they had 126 to the NPP's 109 with more seats yet to be declared.

Back to business, dumso dumso started again this morning, back on in two hours, but hey, still unstable supply and very little water. Phones do not work, the Telcos are still messing up and we need this canker eliminated.

Private sector now takes a cue from the public sector, trying to outdo each other in inefficiency and customers left in the lurch.

But back to the elections, it is the dominant thing now.

The also-rans made up about 1.56% of the total votes cast. Dr. Paa Kwesi Ndoum was expected to show better, but he did not clear .6% of votes. Samia Nkrumah lost her seat and that disappointed me. I think she had good programs for her constituents and following her progress, I thought she brought a lot to their enclave.

Alas, she goes back to the drawing table to figure how the CPP, which got less than .2% of the vote and trailed way behind the PPP, is going to forge another way forward.

Most of us liked Abu Sakara on the IEA debates, but it did not translate into numbers. The less said about Hassan Ayariga, the better. The NDC sweep in Upper West, Upper East, Northern Region, Volta as expected was nothing new, but gains in Western, Brong Ahafo and Central is peculiar.

I get the sense that we need to change some of the models we have adopted from the British Colonial system and look at how we govern ourselves. We are now on air and on TV going over what happened and what did not. History has a place in our lives, but not now.

The debates of errors and success can wait and take place at a table of reflection, maybe over a few nibbles and kibbles, some fufu and akrantie soup.

We came out looking and smelling of roses and I love the self-congratulatory mechanism, reinforcing the process and planning corrections for the next election. Has Dr. Afari Gyan held the post properly as he sees off his last election? I believe so. There is still some turmoil, but we have done well although it could have been better.

The online media was too slow to report voting results and made the detailed hourly analysis complicated. But good work by CiTi, Joy, Ghanaweb and Peace. They certainly served as a vital check on the numbers as they came through.

I was described by some media friends during this sixty-hour election period as a Governance Observer. I quite like the title and I plan to adorn the garb. By default, I tend to look at the issues of governance and how we can make Ghana more prosperous from an economic and business perspective.

The partisan thing clouds what needs to be done effectively and I hope Ghana moves away from over-politiscising and focuses on more infrastructure development.

So what will a John Mahama Presidency portend? A real one I mean, not an inherited one. What change in governance style?

A new signal to Ghanaians, that there is a new program to follow? He might even at this stage borrow some NPP programs. Maybe Free SHS? Many persons I have spoken to about JDM give a mixed picture.

There are extreme views about his sincerity, views regarding his business affairs and some slightly cloudy deals, and there are those who say we could not have found a more committed and hard working leader.

The traditional next 100 days will tell us what we need to know. Cabinet make up, corruption scandals yet to be unraveled, infrastructure build up, and institution issues. Here is my first checklist. First 100 days agenda for me. Separate the Ministry of Justice from the Attorney General and allow the AG to do more of its work properly.

Guarantee Independence of the Judiciary. Pass the Freedom of Information law. Pass the Broadcasting law. Prosecute all corruption issues thoroughly. Make sure we win the Africa Cup in South Africa next year.

We need that victory Mr. President, but leave Mr. Kwasi Appiah to do his job. Please do not go and pray with the team and elect God as part of the team, because he is already there.

Your predecessor championed that coaching method and we lost. All the other teams are doing the same and confusing the issues for God.

Our President elect carries an image of humility and this will be challenged within a short time, as the pressure of running a government with a bruised opposition waiting in the wings dawns after the sweet victory.

The campaign for the next elections starts as soon as he is sworn in and Ghanaians have listed all the promises from the run up to voting.

Ghana needs to know how to suck up mistakes, lick our wounds and move on. We have so much to do. The opposition is critical to how we succeed in good governance and there is an art to opposition.

The incumbency advantage is always very strong and an opposition party can only capitalize on Government's faults to convince the people to swing to their side. The NDC made so many mistakes with Mills as leader, but have still come out ahead. There are lessons to be learnt.

Now the EC has advised all aggrieved parties to seek redress in court, let the rules and processes work and let the law govern us, and the outcomes respected as be. That is how our democracy should work from now on. It is up to our new president to lead the charge and his people follow suitably.

By the time this hits the press, CODEO would have held a press conference to point out some disparities in the vote count. We may yet be in for some revelations.