OBASANJO CAN CROWN OR DENY PRESIDENCY 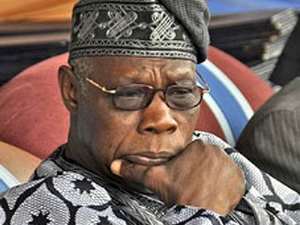 Watch out, nobody has endorsed or deny more presidencies than Obasanjo in the history of Nigeria. All you have to think about are those he crowned like Ebele, Shagari, Yar'Adua and the one he had supported as Deputy: Murtala Mohammed. On the other hand are those he denied presidency like Awolowo, Abiola, Falae, Babangida, Ekwueme, Atiku and Buhari. Apart from himself, it was only Yoruba he could not crown.

Going forward, Obasanjo can make or deny any Nigerian the presidency as long as that person is not a Yoruba. He built his reputation as a non-tribalized Nigerian that can stand up to his own people and other Nigerians love him each time for it. After hatched job, they praised him to high heavens. People build reputation differently and Obasanjo established his against his people that never voted for him. Love or hate him.

Recently, the Ijaw chieftaincies have made it clear that with or without Obasanjo, Ebele is untouchable. They need to think again. Most of them forgot that they came to power was not by votes in their population but by kidnapping their babies, old folks including an attempt on Ebele, intimidation, threat against their people and contribution of environmental disaster to their own region. The malaise has infected the whole Country. They gained sympathy for their just cause from most Nigerians and around the world.

This was how they got Obasanjo's backing, compare to others' patronizing lip service. In terms of population they are far behind other ethnic groups that have not tasted power in Nigeria but their region contributes most of the income earned from oil resources. It is also unfair that oil resources were the only one hijacked by the Federal Government when groundnuts pyramids, cocoa, and coal from others were not. Fair is fair.

The other side of the coin is that those hard working, educated Niger Deltans with perseverance in the South-south lost out on power that unfortunately fell into the hands of thugs, militants and vagabonds that are now admired as successful millionaires and billionaires. The real pioneer of freedom fighters in the Niger Delta have been blown aside and replaced by those that cannot even spell their names.

Sure, Niger Delta is a strong constituency but those well informed men of Niger Delta have been marginalized. Young men and women that went to school and played by the rules watch as school dropouts become “heroes”. Some people said President Ebele is confused, others said he has no clue and he is going out of his way to make more enemies for himself while making friends with those that want him to fail.

Consequences of that misfortune are the drunken-sailors that have forgotten their misery and spend money like no man's business. Nigerians are asking if anything has changed since Ebele a well educated man with PhD, took over. There was so much hope and goodwill to pacify and compensate Niger Delta. Nigeria has not gotten any better, many claimed that it has gotten worse. Boko Haram wants to be compensated too.

President Ebele can fight Obasanjo, his Adimu cousin, all he wants but not on security and safety, the most potent ammunition his distractors hold against him. His backers claimed Babangida made OBJ President and he told crowners they should consider all their investment on him lost. But they must realize Babangida had nothing on OBJ and actually saved IBB's life after Murtala was assassinated. Babangida allowed Dimka to escape as he was a suspected member of the coup. Danjuma wanted him fired, fired!

If this is the record President Ebele wants to take into election in 2015, his advisers and chieftaincies must be on cloud nine. Sometimes we all get overconfident based on substantive record we can demonstrate to the people. President Ebele has little to show and has reinvigorated some old hands looking forward to the presidency. Unless we get a dramatic change, Ebele will get the least votes if he contests for the next election.

Of course his difficulties have been blamed on Obasanjo that endorsed him as presidential material just as that of Yar'Adua and Shagari before him was put on OBJ. But those that criticize him more than OBJ do everything to make sure he does not succeed. They have put every obstacle before him and even ready to burn the Country down and blame him. The more they despise him, the more he tries to appease those.

And who does Ebele go after? Obasanjo, that criticized every president. There is a subtle message here that most people do not grasp. Odi and Zaki Biam were the low points in Obasanjo presidency because of violation of human rights by soldiers. But OBJ and his cohorts defended an action that had to be done to prevent Nigeria from turning to the mess we have today with Boko Haram. When OBJ gave shoot on sight order against OPC in Lagos, other Nigerians supported him. Which Lagosain did not look like OPC in Lagos?

In other words, President Ebele has put focus on himself for his inability to deal with Boko Haram and the perpetrators of Boko Haram enjoy his fight with Obasanjo on Odi. Also note that of all the heads of state, only Obasanjo dared into the lion's den of Boko Haram to try and negotiate peace. One of his negotiators paid with his life. So when Gowon took side with Ebele, he was ridiculed. One of former heads of state that did nothing about Boko Haram than criticizing the one that ventured into the lion's den.

We must not forget that the only head of state that stood up to corruption with EFCC at its zenith was OBJ though his bankrupt ass stole too to compensate for past opportunity he missed. He was also the only one that fired all the “militricians” from the Army and got away with it. Somehow, he survived Abacha. As he did for Ebele, he had the guts to appoint those that have been neglected since the Civil War to powerful positions.

We need not compare agbalumo with oranges. The only people that Obasanjo cannot help are his people. He can crown and deny others. OBJ dey laugh O! Atiku dey laugh.