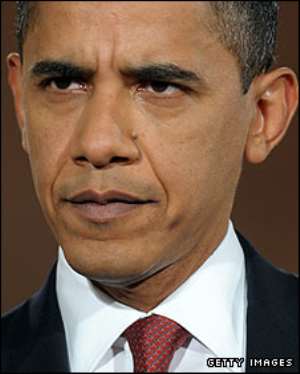 Just as in 2008 when Barack Obama verbalized with a yell of “enough” what was echoing in the hearts of millions of Americans as the nation was engaged in two raging wars and caught in a freefalling economy, the Israelis and Palestinians desperately now need to hear an equally powerful statement from the American President, backed up by his publicly endorsing parameters for peace. The confluence of events – an Israeli onslaught in Gaza at the very moment when the United Nations General Assembly votes on Palestine's membership status – could launch Iran to be an arbiter in Palestinian unity and political positions with Israel, at a time when global Palestinian sympathy could be higher than ever. The United States cannot allow Iran to be seen among Arab publics as the best defender of Palestinian people against Israel because the resulting radicalization of all sides could tear the region apart.

The U.S. is again facing the uncomfortable prospect of standing nearly alone with Israel among the community of nations, likely vetoing later this month a U.N. resolution whose very principles of Palestinian sovereignty the U.S. fundamentally supports. Considering the current military escalations, the United States should probably also count on soon having to vote against another resolution condemning Israeli violence and Palestinian civilian deaths. If no visible progress has been achieved toward peace, the result will likely be further isolation of the U.S. and Israel, and this in turn will likely result in the two countries squarely the publics' target in the Arab Spring. If this were to happen, the world can see ahead what it rues: the Israeli-Palestinian conflict becoming the flashpoint for an open and violent clash of civilizations.

This is a moment of truth in U.S.-Israeli relations, and the United States must now chart a “third-way” where its special relationship with Israel remains untouched from what it must now boldly do to advance peace and deter war. To stop the Palestinian cause of freedom from falling into the Iranian lap, limit the regional fallout from any future strike on Iran's nuclear facilities, and reduce the momentum of war in the Arab Spring region, President Obama should travel to Jerusalem and Ramallah, before his inauguration, and present directly to the people a vision for Israeli-Palestinian peace, the terms of which are based on inescapable realities that the parties have already agreed to at different times in the past and would inevitably be in any future agreement: 1) two states along the 1967 borders with land swaps, 2) a united and shared capital of Jerusalem, and 3) the non-allowance of the right of return other than for the tens of thousands of Palestinians to re-unite families, with compensation for Palestinians instead in its place.

By doing this, President Obama will at once win the hearts and minds of both publics – as being a vanguard of Jewish identity and Palestinian historic legitimacy, outlining what each side can minimally accept and the most they could give to end their conflict. Regarding the right of return, the Israeli government – compelled to make peace rather than face the demographic consequences of annexing the Palestinian territories – would never therefore agree, as a matter of safeguarding the Jewish majority and identity of the state, to the repatriation of all the Palestinians displaced by war. The president should clearly connect the parameters for peace as fully emblematic of the Arab Peace Initiative and the other frameworks of Israel's peace with Jordan and Egypt and the interim agreements with the Palestinians.

In Ramallah, rather than first defining a unified stance on Israel, the U.S. president should also speak about an alternative approach to Palestinian unity: to instead focus on their current, new system of government based on their identity as a people — one that reflects how they see themselves 100 or 200 years from now, beyond the immediate wrenching conflict. Prior to its rise to power, Hamas in Gaza was known for its decentralized delivery of human services. The Fayyad plan in the West Bank emphasizes decentralization to build political and economic self-reliance by increasing local control. Decentralized public administrations align with advancing sustainable human development, which provides freedom from economic and political domination and price fluctuations. Palestinian factional governments could find common ground while together forming a federalist-decentralized government, basing it on what they have already shown by their actions to be at their core identities: meeting human needs through supporting localized actions. Similarly, during the forming of the United States, individual states would not have joined the union had it not been a federalist-decentralized system.

President Obama's call out to Americans of “enough” resonated and was the right thing to do in its time, so now the president must ring out again, to save Israelis and Palestinians from their own precipice, and the region with them.

Dr. Yossef Ben-Meir is a sociologist working and living in Marrakech, Morocco.