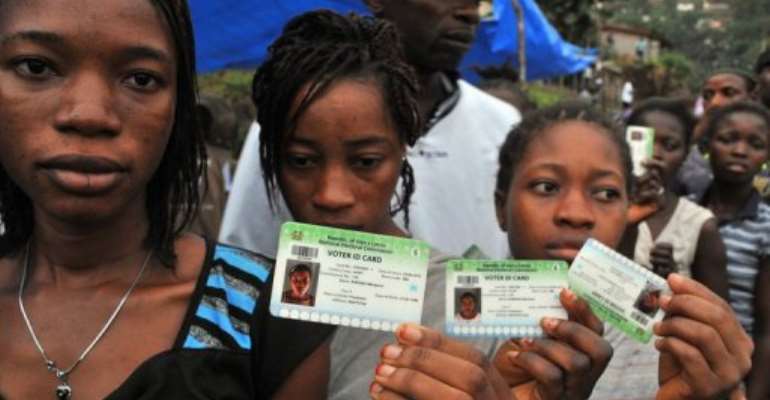 Voters lined up all day to vote for a government they hope will bring prosperity. By Issouf Sanogo (AFP)

Observers estimate high turnout after Saturday's presidential, parliamentary and local elections in which voters lined up all day to vote for a government they hope will bring prosperity and cement growth after a decade of peace.

On Saturday night after polls closed, citizens crowded around radios as provisional results from individual polling stations were announced.

Sustained cheers, vuvuzela blasts and whistles erupted across a ruling party stronghold in Freetown as incumbent Ernest Koroma's All People's Congress (APC) pulled ahead in parliamentary poll results from the provinces.

Decisive results are not due until later next week and final results will be announced on November 26.

The poll is seen as a tight race between Koroma who has overseen a construction boom, and ex-military leader Julius Maada Bio who has amassed support amongst many still struggling to survive in what is still one of the world's poorest nations.

Koroma is regarded as the favourite, but analysts expect a tight race.

While no major incidents have marred the election process, it will be most fragile when results are released. Both candidates have said they are confident of victory and Bio has warned he will not accept a "dirty election."

Since independence from Britain the two parties have dominated the political scene, both drawing support from traditional ethnic strongholds.

Bio's Sierra Leone People's Party (SLPP) is typically supported by the Mende -- one of the country's main tribes -- and other southern tribes. Koroma's APC is favoured by the other major Temne tribe and others in the north and west.

"The real test for Sierra Leone's democracy is how the loser accepts the defeat," said Jonathan Bhalla of the London-based Africa Research Institute.

The election is a yardstick on Sierra Leone's recovery from the 11-year civil war that left 120,000 dead and many mutilated by rebels who hacked off hands and feet. It will also hand the victorious party stewardship of a lucrative mining boom from its rich mineral resources.

"The theme of this election is the fears that have been expressed to us by the people of Sierra Leone about a return to violence and so far we've seen a relaxed atmosphere with people happy to be taking part in voting and a peaceful election."

He said the transparency of the process was important for the acceptance of results and urged parties to repeat calls for non-violence to their supporters as results began to be counted on Saturday evening.

In the presidential election, a candidate will have to score 55 percent to avoid a run-off.

A decade after the end of a war synonymous with feared rebel leaders armed by the sale of "blood diamonds", Sierra Leone has become accustomed to peace.

Now the concerns of most voters are development, prosperity, improved access to education and health care, and greater employment opportunities.

While still one of the world's poorest countries, Sierra Leone is rich in mineral resources and massive iron-ore stores are expected to add 21 percent growth this year to its $2.2 billion (1.7 billion euro) gross domestic product, the International Monetary Fund estimates.

However, the country has one of Africa's lowest life expectancies at 47 years according to the World Bank, and highest rates of maternal mortality. Youth unemployment levels hover at 60 percent.