Pax Aufricana: Who is paying for the African Union anyway? (1) 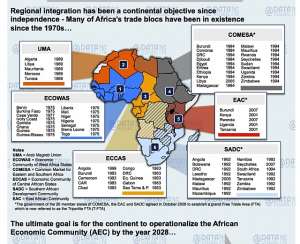 “The Accidental Ecowas & AU Citizen”:
By E.K.Bensah Jr
Earlier this year, I wrote a series of articles that sought to look at the progress the Africa Union has made even before the celebration of its tenth year. Entitled “Pax Aufricana”, the second of the series started: “The manifold tags of “Africa rising” and the whimsical “Pax Aufricana” (coined by yours truly) are all tags to connote something bigger happening on the continent of Africa. They are not chimerical aspirations of what some of us would like to see. Despite the claims that intra-african trade, for example, is around 11%, the fact remains that Africa, through the Union, is doing something about it by not just proposing a Continental (African) Free Trade Area(CFTA), but coming out with an action plan, which has measurable goals, targets and agreed timelines.”

I then went on to elaborate on the African Union Commission: “The mission of the AUC is to become: “an efficient and value-adding institution driving the African integration and development process in close collaboration with African Union member states, the Regional Economic Communities and African citizens.” Stressing that “it remains the only unique Pan-African body that has the political mandate to develop the continental policy space and speak for Africa”, I went on to explain what the AU itself calls “strategic comparative advantages”: “These comparative advantages are consistent with the five emergent themes that exist for the AUC. These are: political integration; scientific, economic, social and physical integration and development; Governance; institutional capacity-building for continental integration and development; peace and security.”

In the article “Pax Aufricana: Africa's Plans cannot be slaves to a donor construct”, I averred: “Even if we forget the AU has had Strategic Action Plans since the establishment and operationalisation of the AU in 2002, we surely cannot think that the AU has been working as slaves to a donor construct. While it is true that this-same construct has both helped and hindered Africa's progress, it is not for a want of trying to break free – as Africa has done back in 2001 with the Lusaka Appeal, when it admitted that much of the funding offered by donors was slow and unrealistic. Even before the explosive events of Cote d'Ivoire in 2011 and the demise of Qaddafi, the AU had been discussing – by way of a committee – alternative sources of financing.”

Suffice-to-say, three developments have caused me to re-think my arguments. The first was when I met a high-level official of the UNECA at a meeting in September who would tell they had been reading my articles, but simply thought while my views on the AU are insightful, it's “great to be young!” Simply put, I was probably over-optimistic about the organisation I have spent column inches promoting. The second was the statistics of the “Pax Aufricana” series, which was in their thousands. The average hit for them was 1300 views. It got me thinking that clearly, this is something people are interested in reading about. The final and most important development was the latest article by the Kenya-based Centre for Citizen's Participation in the African Union (CCP-AU).

Entitled “A Stream cannot rise above its source: Financing of Africa's Regional Integration”, the five-page analysis (written by the Executive Director of the CCP-AU Janah Ncube and Policy Analyst with the Open Society Foundation's AU Advocacy Program Maureen Akena), offered a fairly succinct view of what is happening with the African Union's finances; what are the challenges to the financing, and what models exist that can inform a change.

Financial State of the African Union
Let's start with the state of the financing. We learn that the July 2012 summit approved the 2013 budget of the AU, which totals USD277 million, with contributions as follows: the AU member states pay 44% o fthe budget (122.8 million), with donors paying no less than 56% of the budget, or 155.3 million. That said, the total operational cost of USD117.4 million is covered by the Member states. With respect to the programs budget, member states pay 3%, with the donors footing a whopping 97% of the budget.

According to the authors, program costs for key institutions, such as the Pan-African Parliament(PAP); the Human Rights Commission (ACHPR); the African Court (AfCHPR); NEPAD Planning Commission Agency (NPCA); the Commission on International Law(AUCIL); the Anti-Corruption Board and the Committee on the Rights and Welfare of Children (ACRWC) are all paid for by external donors! There is no allocation at all from member states towards the latter, which has the mandate to promote and protect the rights of children in Africa. Never mind the fact that the Chinese have built and paid for the USD$200million AU headquarters, the German government will soon complete at a cost of 26.5 million euros the building for the AU's Peace and Security Department.

There is no gainsaying “he who pays the piper calls the tune”, which is the appropriate sub-heading for the section in the report explaining the dominance of donors in the operationalisation of the AU's work. The report states “while it is commendable that the operational costs are wholly covered by AU member states, it is quite disturbing that the integration and development agenda for this continent is being paid for by foreign resources.” Inevitably, it can only prompt the question of who really is in control of the AU! Even if donors, because of the global economic downturn, were able to come up with 42% of what was expected from them in mid-2012, does that substantial sum not lead the AU member states beholden to them?

Civil society actors and ordinary citizens can moan about the African Union until the cows come home, but the bottom line is that this is perhaps the only continental institution in the world that is all-encompassing and inclusive. It is the only institution—bar our regional economic communities that is going to be around for a very long time. Its days of the OAU are long-gone (even of the culture of the OAU might not be), so it is important the up-and-coming generation takes the bull by the horns and gets serious on making the AU accountable to the people who matter most—the citizens of Africa.

In the second part of this article, I will conclude the two-parter by examining a bit more in detail some of the issues brought up by the report, including the role of the regional economic communities (RECs) in the context of the AU; the countries that pay most to the AU; and explore alternatives to financing that are working in the RECs of ECOWAS; UEMOA; CEMAC and ECCAS.