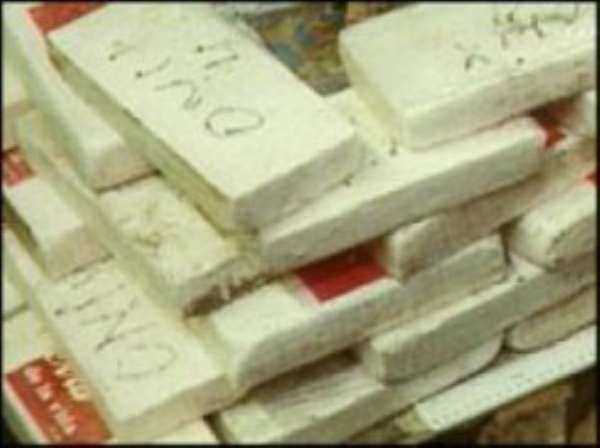 Detective Chief Inspector Charles Adaba, the investigator in the MV Benjamin cocaine saga Thursday told the Accra Fast Track High Court that in 2006, the Minister of the Interior set up a committee to investigate how five slabs of 30 slabs of cocaine, retrieved from MV Benjamin got missing.

He, however, said that he was not privy to the committee’s report.

Testifying under cross-examination by Mr George Heward Mills, counsel for Asem Darkey, the witness said, when he took over investigations into the case, he was handed only 25 slabs of cocaine although investigations indicated that 30 slabs were contained in the one parcel of cocaine found on the vessel.

He said the 25 slabs were handed over to him by his predecessor investigator, Detective Inspector Justice Oppong who took over the investigations in August 2006 while he took over in October that year.

The witness agreed with counsel that it was possible that there were some lapses in the tip-off that led to the arrest of the vessel with the cocaine but indicated that investigations were carried out to find out the truth or otherwise of the intelligence report.

Inspector Adaba disagreed with counsel that information about the missing 76 parcels of cocaine was a mere suspicion and that upon receiving the information one parcel of the cocaine was retrieved and witnesses who were part of the team that imported the cocaine confirmed the story while samples taken to the Ghana Standards Authority tested positive for cocaine.

The case started at the High Court following the decision of the Accra Circuit Court to discharge Darkey because of a nolle prosequi filed by the Attorney-General’s Department.

He was, however, re-arrested and taken into custody at the BNI.

The accused person, who went into hiding from 2006 until February 2, 2012, was arrested by BNI officials at the Korle Bu Teaching Hospital upon a tip-off.

Darkey was indicted for allegedly paying $3,000 to a detective sergeant to facilitate his escape.

His charges have been increased to five from an initial three. He is now facing counts of conspiracy, possession, importation and exportation of narcotic drugs and corruption of a public officer, to all of which he has pleaded not guilty.

According to the facts of the case, about midnight on April 26, 2006, a vessel, the MV Benjamin, reportedly carrying about 77 parcels of cocaine, with each parcel weighing 30 kilogrammes, docked at Kpone/Tema and discharged the cocaine.

The 77 parcels were unloaded into a waiting vehicle which carried them away.

According to the prosecution, in the course of investigations, Darkey’s name featured prominently as the importer and/or owner of the drug.

He was said to be the person who had chartered the vessel at a cost of $150,000 to tow another vessel from Guinea to Ghana.

Darkey, the prosecution noted, was the person who carted the 77 parcels on the arrival of the ship at Kpone.

The disappearance of the cocaine led to the setting up of the Justice Georgina Wood Committee and the subsequent trial of persons alleged to have played various roles in the whole saga.

Although the committee recommended that Darkey be prosecuted, he had since 2006 proved elusive until his arrest in February 2012.

Eligibility Age to become President of Ghana: Lessons from t...
47 minutes ago