THE REVOLUTIONARY WIND IN THE SAILS WITH WOMEN AS THE CAPTAINS 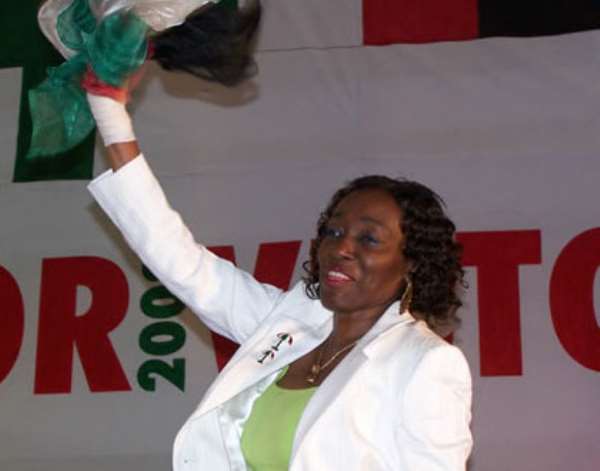 The National Democratic Party (NDP) is scheduled to hold its maiden National Congress in Kumasi in Ashanti Region on Saturday October 13.

Mr Rawlings is said to be waiting for the NDP congress to unleash venom on the NDC leadership, especially 'the old evil dwarfs' who have virtually hijacked the party he founded with his blood.

A day after he indicated his preparedness to support his wife, Nana Konadu Agyeman-Rawlings's decision to run for the flagbearership position of the NDP, a breakaway party from the NDC, the former President's name has popped up as the one scheduled to be the 'special guest of honour' for the NDP's national delegates congress slated.

Sources said Mr. Rawlings had already accepted the invitation and confirmed his participation.

Some political analysts think Nana Konadu is contesting as a result of incessant appeals from the grassroots of the NDC but in the women advocate side of view, they believe it is the revolutionary wind whirling in the sails of the continent for women to take up leadership roles. If it is indeed the wind of change, are the fellow women ready to smash the long held mentality that women are their own enemies?

In a related development, The CPP flagbearer, Dr. Abu Sakara Foster has resorted into choosing a female running mate. The Dwantoahemaa of Dormaa Traditional Council in the Brong Ahafo Region, Nana Akosua Frimpomaa II, is set to be unveiled as running mate to the Convention People's Party flagbearer for the December polls.

The CPP will thus become the second political party after the PPP to have a female running mate in the presidential contest.

The PPP's Dr. Papa Kwesi Nduom a couple of weeks ago outdoored Ms Eva Lokko as his running-mate for the December elections. The PNC is yet to name a running mate but its flagbearer Hassan Ayariga has stated he will choose a woman as his running mate.

Whiles others believe women are good manageress thus they should be supported, the cultural purists ague it is not natural for women to have an equal footing to men hence see female advocacy as yet another form of westernization.

One may be forced to ask if it is part of African culture to keep women oppressed; who really decides what African culture is or not. The only thing that culture guarantees is that it might change or it's dynamic. The African women now want to be at the forefront of that change.

As this change unfurl, we see a Liberian female president, women constituting greater part of Rwanda's parliament and a lot taking up more decisive roles in their countries.

Ghanaian women believe the time is ripe for the African woman to reassert herself as a good manager not for only homes but also the nation as a whole.

One issue that might also awake strong debates is the active involvement of traditional leaders into politics.

Your stand on these issues may be same as mine or otherwise let it be known.

Be factual in your dealings — NPP Germany warns Blakk Rasta ...
37 minutes ago