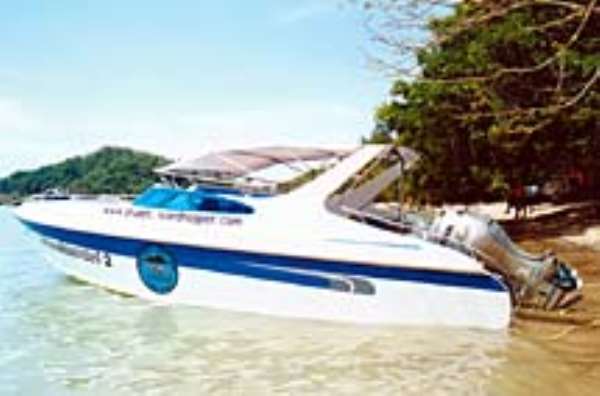 – Minister Yet To See Documentation THE RECENT acquisition of a speedboat by former President Jerry Rawlings that generated enormous public debate is believed to have no paperwork documented by the ports and harbour authority to guarantee its operation in the country's waters.

Passing this comment at his turn at the meet-the-press series yesterday in Accra, the Minister of Ports, Harbours and Railways, Professor Christopher Ameyaw Akumfi said his ministry had not yet seen any official procedure in terms of documentation covering the importation of the speedboat.

"There is no paperwork on the speed boat recently acquired; I have not seen any paperwork", the minister of the newly created portfolio told the journalists. According to Prof.

Ameyaw Akumfi, the shipping commissioner would soon find out if any documentation were made on the speedboat to legalize its operation. Additionally, the minister noted that if the boat did not meet the specifications of the ministry, its owner would have to comply with directives given.

"The speedboat would help very much on the Volta lake if its meets our specifications", he tersely observed.

Even though the minister in his comments never mentioned the name of the owner of the speedboat, all indications pointed to the Ex-president Rawlings who recently imported a speedboat at the cost of $30,000 for use on the Volta Lake.

Out-dooring plans to salvage the country's ports and railway industry from the doldrums, Prof. Ameyaw Akumfi said his ministry, within six months of its establishment, was working towards transforming the two commercial seaports of Tema and Takoradi into hub-ports in western and central Africa.

In the light of this, other maritime sectors of the country would also be developed in order to make Ghana the pivot of maritime business at world-class level.

The expectation of a bulk-haulage regimen in rail transport, the minister noted, would be reduced to make way for competition on the local and international markets as it has the potential of effectively opening up the hinterland and subsequently contribute to the economic growth of the country.

To ensure that the ministry attains its target of rescuing the industry to meet international standards by the years 2005, Prof. Ameyaw Akumfi said his outfit would review and formulate policies that would aid in creating enabling environment for feasible business operations as well as institute efficiency and safety into the industry.

With all the rail-line rusted and of no effective use, the minister indicated that new lines were to be established to supplement the existing line to ensure adequate transportation. These include the Accra to Dodowa rail-line and Accra to Kasoa rail-line, which are expected to serve surrounding townships.

The Achimota to Tema rail-line, according to the minister, is dead as it could only serve a quarter way through, following the takeover of the line by roads and buildings that had sprung up along its catchments.

He called for investors to invest in the railway industry up to a stipulated period of 25years to revamp it since the ministry had not got adequate funds to put the industry in good shape.

By the end of the period Prof Ameyaw Akumfi noted his ministry would have acquired the requisite experience to manage the industry. He said a 400-acre land had been acquired at the cost ¢3.5billion and a compensation of ¢1billion paid for all crops that were on the site of the inland port at Boankra, near Kumasi to supplement the two ports.

Achievements attained in the last two years in the shipping and navigation division, Prof. Ameyaw Akumfi noted include the election of Ghana to the International Maritime Organisation (IMO) and the examination and certification of over 150,000 seafarers of the services on board local and foreign ships.

He said Quay Two at the Tema port would be extended by 200 metres to be developed into a container terminal to accommodate two second-generation container vessels together with the acquisition of container gantry cranes to aid in the fast delivery of containers.