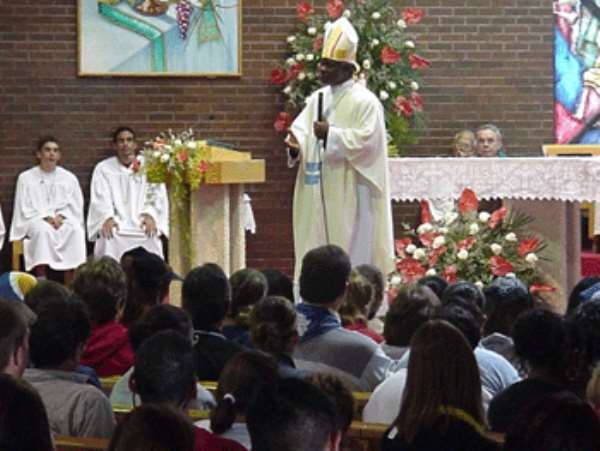 Pope John Paul II on Sunday, elevated the Right Reverent Peter Kodwo Appiah Turkson, the Catholic Archbishop of Cape Coast to the rank of a Cardinal, the first in the annals of the Church in Ghana. The selection of Cardinals is an exclusive right of the Pope, who confers it on Priests who are outstanding in Church doctrine, have excellent morals, pious and are prudent in their actions. Addressing a news conference in Accra, Archbishop George Kocherry, the Apostolic Pro Nuncio in Accra, said Cardinals constitute a body called "College of Cardinals," who elect Popes and assist him as well. "They are known as the 'Princes of the Church' with the title of eminence and are also close collaborates of the Pope". He said so far the Church has 366 Cardinals worldwide, out of which 120, below the age of 80 years are eligible to be part of the conclave, to elect Popes. Archbishop Kocherry noted that the selection of a Cardinal in Ghana is in recognition of the present strength and growth of the Church. He said, a ceremony would be held in the Vatican by the Pope on Tuesday 21st October to consecrate 30 new Cardinals from various parts of the world. The Most Reverend Turkson, thanked God for the events unfolding in his career. "I recognize that God must have and be operating with a time table for my life, which in pace, is not quite how I plan and does not wait for my slow plan," he added. He said his promotion is in recognition of the state of the Catholic Church in the country. "It is in recognition of the toils of early missionaries, the work of the present clergy and the zeal of many Christians of the religious body". He urged other religious bodies to preach messages based on "Christian decency," which would help convert lives especially the youth to eschew sexual promiscuity to avoid being infected with HIV/AIDS. "Condoms could save us from AIDS but does not save us from promiscuity," he added. The College of Cardinals This is already mainly made up of like-minded conservatives reflecting John Paul's choices during his 25-year-papacy. A new batch will further strengthen the ailing pope's influence on the choice of his successor. John Paul will elevate the group at a consistory on Oct. 21, coinciding with the celebrations marking his 25th anniversary as pope. The pope read the list out from his studio window overlooking St. Peter's Square to pilgrims and tourists gathered for his traditional Sunday greeting. Much of Italy, including Vatican City, was without power on Sunday because of a massive blackout. The Vatican managed to amplify the pope's remarks with a backup generator provided at the last moment by Italy's RAI state television. Inside the Vatican press room, journalists huddled with candles and flashlights to read the list. Only a few copies of the list had been made before the power went out early Sunday, shutting down the Vatican's copy machines. Among the new cardinals are archbishops from Nigeria, France, Sudan, Spain, Scotland, Brazil, Ghana, India, Australia, Croatia, Vietnam, Guatemala, Hungary, Canada and Italy. Rigali is the only American on the list. Prior to Sunday's announcement, the College of Cardinals had 164 members, but only 109 of them are under age 80 and thus eligible to vote in a conclave to elect a new pope. Of the eligible voters, all but five were named by John Paul. The new cardinals named on Sunday brought the number of voting-age cardinals over the 120 maximum electors. However, John Paul has previously exceeded that number in prior consistories. The last time John Paul held a consistory to elevate the "princes of the church" and to give them their red hats was in February 2001. This will be the ninth consistory of his pontificate. John Paul had long been expected to name additional cardinals, wanting to add more of his personal touch to the group that will eventually elect his successor. His declining health, most evident during his recent trip to Slovakia, may have speeded up the announcement.