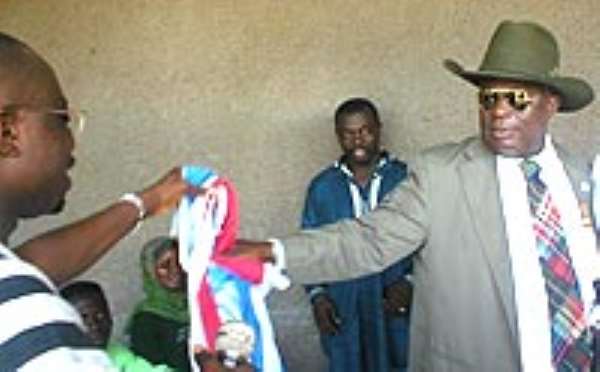 Maverick Politician, Mr. Kofi Wayo, has stated that the appointment of Mr. Kweku Andoh Awortwi as the chairman of the management committee of the Volta River Authority (VRA) was a clear manifestation that Mr. Tsatsu Tsikata, a former capo of the energy sector was back in full time business.

He said he was not sure that Mr. Awortwi, who was groomed by Mr. Tsikata, could make anything good to resuscitate the energy sector since his mentor could not transform the sector during his reign but rather sent the VRA into doldrums of non-performance.

Mr. Wayo made this observation in an interview with The Chronicle in Accra yesterday in reaction to the resignation of Dr. Charles Wereko-Brobby, as Chief Executive of VRA. He also spoke about his inability to file his nomination on the ticket of the NPP to contest the parliamentary elections in 2004l.

According to him, Dr. Wereko-Brobbey's conduct and performance at the VRA leading to his resignation would warrant an interdiction if it were to be in any western country. He said, "The purchase of Strategic Reserve Plant without approval from the authority and the excessive maintenance cost of over $500,000 a month, is a crime and he could be interdicted," he added.

He described as funny the conditions attached to the SRP, which had not been divulged to the public, saying that it raised eyebrows. He added that, even though the GNPC's power barge was procured at the cost of $110million in 1999, it was yet to produce any power, because of poor planning and implementation.

Mr. Wayo, who always castigates the NPP for non-performance, said the sustainability of the Effatu gas reserves to fuel the barge had not been proven, adding that, the gas purchase price was not even agreed before the barge was built while the gas field had not also been exploited.

He attributed the inability of the VRA to tow the barge, which is currently at the Sekondi Naval base to its designated pond at Effasu to poor construction of the passageway. All these he said constituted economic loss to the country.

On his inability to file his nomination to contest the primaries at Ayawaso East constituency, Mr. Wayo said, he was discouraged by the abysmal performance of the NPP. "I don't want to be a liar because my culture does not allow me to do so. I thought the NPP has come to alleviate the sufferings of the masses but rather, they came to deprive the masses of their human rights and also making ends meet."

According to him, even though he believed in the manifesto of the NPP, it was unfortunate that it was just used to deceive the electorate to vote for them. "If the manifesto is well implemented, it would raise the hopes of the people."

He accused the NPP administration of abandoning the plight of the people by increasing utility tariffs unnecessarily. "I am disappointed and shocked by the level of increase of utility rates. The top executives are just making money by bringing charlatans to come to the nation to rob us while the brains get their booty."

Mr. Wayo said the two major political parties, NDC and NPP were the same in terms of finding solution to the suffering of the electorate and called for a change of government every four years if it was established that the governing party failed to accomplish its promise. He said he was still a sympathizer of the NPP. "I am reflecting over things and at the appointed time I would make my position known."