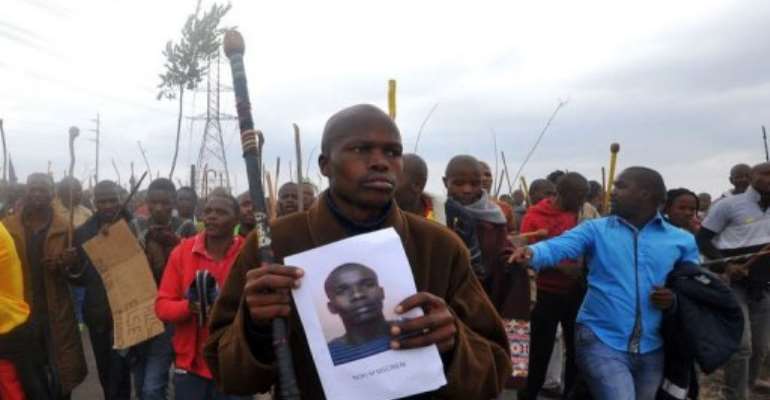 A miners carries a photo of a killed miner. By Alexander Joe (AFP)

Armoured police trucks and two police helicopters kept watch as around 3,000 miners, carrying sticks and chanting, marched to a shaft owned by the world's number three platinum producer where a wildcat action is in its fourth week.

"We told them if they don't close the mine shafts we will make them ungovernable," a worker leader told strikers after the group had re-gathered near where police gunned down 34 people last month.

"The management is trying to divide us and coaxing some of you to go to work. Remember people died as result of the struggle and at the end of the day your boss does not stay with you."

Earlier, marchers took to the streets to demand that the company bow to their wage demands. One placard stating "Lonmin must decide to give us money or close".

The show of defiance came as a fresh round of mediated talks kicked off to try to broker a breakthrough in the stalemate, as Lonmin warning that an indefinite strike will put 40,000 jobs at risk.

Mine manager Jan Thirion said worker representatives had threatened that "if we don't leave here at one o'clock (1100 GMT) they will come and burn down the shaft, burn down cars and kill us".

"We want to talk peace, they want to talk war," he told reporters after speaking to the representatives through a fence under high security.

But workers dispersed peacefully after their deadline passed, singing President Jacob "Zuma is a fool, we are ruled by stupid people" as they headed back to where police had opened fire on August 16, killing their colleagues.

Some carried a picture of a dead miner who is to be buried this weekend. There was shock at his death as he had left the site with only a bullet wound in the leg.

"We consider him a hero like Chris Hani," Mzuzu added, referring to the anti-apartheid icon gunned down a year before South Africa headed into democracy.

The deadly police volley against the miner on August 16 shocked the world with its echoes of apartheid-era police brutality.

The police shootings brought the death toll to 44 after escalating from a wildcat strike in which 10 people, including two police officers, had already been killed.

The dispute has become a battleground for rival political and labour factions and sparked fears of a spillover of unrest into the key mining sector.

London-listed Lonmin, whose shares dropped Wednesday, reported 4.2 percent attendance across all its shafts but was hopeful of a outcome in the latest talks.

"We are willing to negotiate wages, in the right manner," it said.

"Violence and intimidation have no place in bargaining. We are working hard to reach agreement with all parties through the peace talks. All of us must condemn violence."

The government has condemned "irresponsible and inflammatory statements" after Julius Malema, the charismatic former youth leader of the ruling ANC, called for the mines to be made ungovernable.

"Government has a responsibility to maintain law and order and therefore will not tolerate any irresponsible and unwarranted provocation from any quarters of our society," said a statement from a minister in the presidency, Collins Chabane.

Ministers urged law enforcement agencies "to do anything necessary to prevent any further loss of lives and ensure that both private and public property is protected."