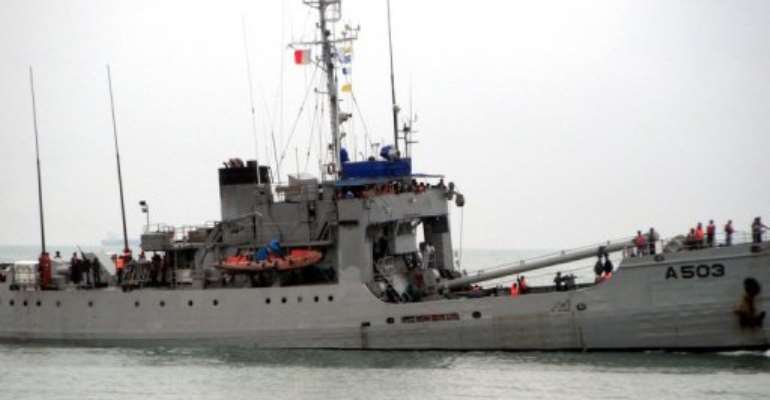 Pirates are sailing a fuel-laden tanker into the open sea off Nigeria. By Str (AFP)

LAGOS (AFP) - Pirates have hijacked a Singapore-owned oil tanker off the coast of Nigeria with 23 Indian nationals on board, the third attack in just over two weeks in the Gulf of Guinea.

The International Maritime Bureau has said the vessel was seized within the port of Lagos, but Nigerian officials denied that report.

A spokesman for the firm that manages the hijacked Abu Dhabi Star said the vessel's location at the time of the Tuesday evening attack had not yet been established.

"We only got one message from the seafarers on board saying that they were being boarded.... We don't actually know the exact location of where she was hijacked," said Pat Adamson of Maritime Technical International.

Adamson said the vessel could have been carrying up to 45,000 tons of gasoline at the time of the attack.

He added that an operation had been launched to reclaim the vessel, without providing specifics.

Adamson told AFP that a Nigerian naval ship was spotted near the Abu Dhabi Star later Wednesday, but it was not clear if a rescue operation had been carried out.

Noel Choong, head of the IMB's Malaysia-based piracy reporting centre, told AFP the crew members had locked themselves in a safe room when the hijackers boarded.

The Nigeria Ports Authority (NPA) denied that the vessel had been hijacked within the Lagos port complex.

"There has been no hijacking of vessels in the Lagos ports. In fact, it cannot happen and it has never happened. If there was any seizure it would be on the high sea," NPA spokesman Michael Ajayi told AFP.

Ships have previously been attacked while moored near the port as they wait to dock.

A security analyst said such attacks near Lagos and other ports in the region are becoming a worsening problem.

"For the last year and a bit we've been seeing high-level piracy off of Lagos, where they've been targeting tankers to steal their fuel oil cargo," he added.

Pirates hijacked and looted two oil tankers off nearby Togo last month. The two ships and all crew members were later freed.

The IMB's Choong said the same criminal syndicate could be behind the latest attack since the modus operandi was the same.

"They would seize the ship for about five days -- ransack the crew's cabin and syphon the oil to another pirate vessel," he said.

The IMB has repeatedly warned ships plying the Gulf of Guinea off the west coast of Africa to be vigilant and called on authorities to step up patrols, saying last year the region was emerging as a new piracy "hot spot".

The area has seen 37 attacks, including several hijackings, kidnappings and killings, so far this year. Pirates usually target fuel cargo, loading it onto other ships to sell on the black market.

Cyrus Mody of IMB, who closely tracks the region, said pirate attacks in the Gulf of Guinea have long gone under-reported and that the area had likely seen more violence than recent figures suggest.

As a result, some companies working in the region may not have been fully prepared for the risks involved.

Nigeria and nearby Benin launched joint patrols last year in a bid to combat the problem.